Atkins Papers: Proposals for Constructing the Bridge Across the Carrying River at Woodville, Ohio, 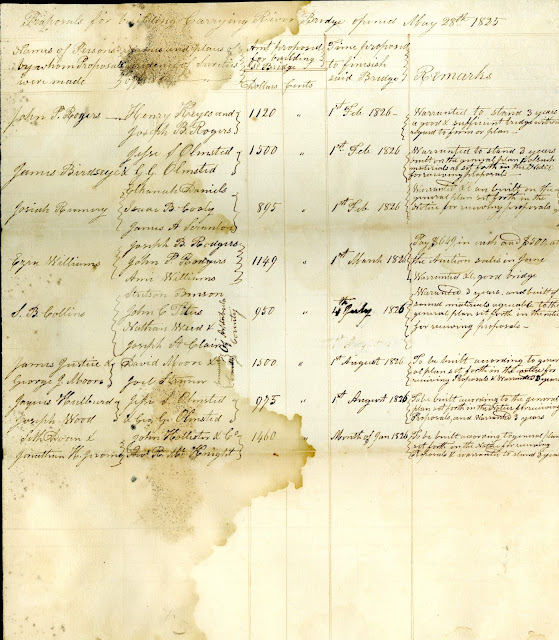 List of Bids Submitted for Constructing the Bridge across the Carrying River at Woodville, Ohio
1825


The scanned documents are part of the Quintus F. Atkins Business Papers recently donated to Hayes by Mr. Harry Wilkins on behalf of the Tabor Historical Society of Tabor, Iowa.  They were preserved by Martha Atkins, who graduated from Oberlin College where she met her husband John Todd. Before moving to Tabor, Martha and John  were active in Oberlin’s anti-slavery and temperance movements.

Martha’s father, Quintus F. Atkins was appointed by the state of Ohio as Superintendent of the Maumee and Western Reserve Road that passed through the Black Swamp.  Having discovered the description of the Atkins Papers held by HPLM, Wilkins and the Tabor Historical Society believed that Tabor's Atkins Papers could be better utilized if it were merged with those located here at Hayes Presidential.

A portion of Tabor's Atkins Papers includes proposals sent to Atkins from Sandusky Countians, hoping to gain the contract to build a bridge across the “Carrying River” (i.e. the Portage River) where the road passed through Woodville, Ohio.

Atkins listed the names of bidders, their sureties, amounts proposed, and expected dates of completion. The eleven proposals listed in the first document were written during the spring of 1825. Tabor's Atkins Papers include a total of 18 proposals. Below is that of Thomas Miller. Thomas and Harriet Miller owned a tavern at the site where the Portage River (Carrying) crossed the Maumee and Western Reserve Road (now Rte. 20) as early as 1825.

Unfortunately, Tabor's Atkins Papers do not provide evidence of who was awarded the contract. A Sketchbook of Woodville, Ohio: Past – Present, written in 1986 for the village’s sesquicentennial, states on page 14 that the “first bridge over the Portage River in Woodville was a covered wooden bridge. It is not known just when it was built.” The latest date proposed by a bidder was August of 1826. The requirements stipulated that the bridge should be capable of withstanding ice, flooding, and driftwood for a period of three years. The wooden bridge did all that and much more; it was not razed until 1878 when it was replaced with an iron bridge.