American Eagle to the Rescue 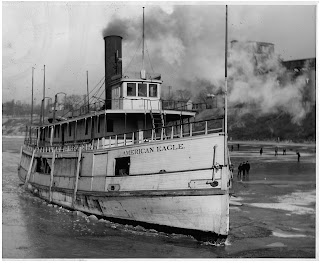 While spring is coming to Northwest Ohio, it has beeen only a few weeks since the U. S. Coast Guard rescued fishermen from Lake Erie when the ice broke loose and began to drift. This brought to mind an article I'd read while researching the Lake Erie vessel, the "American Eagle." The vessel (161 tons, 104 foot keel measurement; 24 feet wide with a draft of 9 feet) was built by John Monk in Sandusky, Ohio. She was sheathed with ice iron capable of breaking 8 inches of ice without stopping. By backing up and bucking the ice, the "American Eagle" could break through 24 inches of solid ice.

During the winter of 1898/1899, a large crowd was skating on the Sandusky Bay when the ice broke loose and began drifting out into Lake Erie. Captain Fred Magle and the "Eagle" were dispatched "to the rescue." The "Eagle" succeeded in getting alongside the ice field and then put a line on the field. Magle towed the ice field back to the Sandusky Bay while the skaters continued to skate all the way home.

The "American Eagle" was built for Wehrle and Werk of Middle Bass Island, later known as Andrew Wehrle and Son. Duing the spring and fall of the 1880s, she carried all of the wines from Middle Bass Island and Kelleys Island to Sandusky. During the summer months, the "Eagle" ran the Sandusky and Peninsula route to Put-in-Bay; stopping at Marblehead, Lakeside, and Catawba.

In the spring of 1882, while carrying sport fishermen to the Pelee Island Club on Point Sheridan, the "Eagle" raced the steamer "Jay Cooke." Between Cedar Point and Carpenter's Point, Kelleys Island, the "Eagle's" boiler exploded, killing Chief Engineer James W. Johnson, Fireman Frank Battle, and deckhands Frank Walker and Lorenze Neilson. The tug "Mystic" towed her back to Sandusky, where her boiler was rebuilt.

Three years later, during an excursion run from Lakeside to Put-in-Bay, she struck a reef about 1 1/2 miles west of Kelleys Island. The shoal still carries the vessel's name today. After repairs at the Detroit Drydock, she was chartered by T. F. Newman for the "fruit run" from the Lake Erie islands to Toledo and Cleveland. The "Eagle" transported tons of peaches throughout the 1890s. During the summer months, she continued to run excursions.
Posted by Nan Card at 11:39 AM 2 comments:

The Price of "Progress" 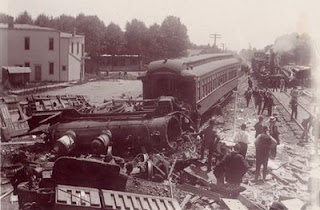 The night of August 18, 1893, was like any other in Lindsey, Ohio – hot, still, quiet, with stars twinkling silently in the dark sky. Local freight train Number 74 sat motionless on the siding, awaiting the passing of the Pacific Express. Bound for Chicago, the Express was 15 minutes behind schedule as it steamed out of Fremont. Its two coaches and three sleeper cars were loaded with weary passengers, including the entire Chicago Colts baseball team. The Pacific Express throttled up and thundered down the tracks at full speed toward the sleeping village of Lindsey.

Lounging beside their silent locomotive, the crew of Local 74 waved at the Express engineer. Seconds later, the earsplitting sound of metal grinding against metal ripped through the night air. The ground shook violently; windows rattled and then broke.

Although the Pacific Express’ engine and tender and baggage cars had passed the switch safely, weakened bolts suddenly gave way, sending the coaches and sleeper cars careening up the siding directly at train Number 74. Cars crashed into the freight train’s locomotive with such force that it spun completely around. It then toppled on its side.

As the cars of the Express grated against the freight train, the coaches and sleepers were ripped open, hurtling passengers into the midst of the tangled wreckage. The tender of the freight was tossed into a carload of flour, cushioning his fall. But Number 74’s engineer, porter, and brakeman weren’t so lucky. They were crushed beneath the freight’s engine as it toppled on its side.

Six Fremont physicians arrived at the scene by special train. The sight that greeted them was horrific. According to the Fremont Democratic Messenger, “arms, legs, and heads protruded from the twisted wreckage.” Many of Lindsey’s 500 residents stumbled from their beds, dug through the masses of metal, and carried victims to their homes. Those with minor injuries were loaded on to the undamaged cars of the Pacific Express and sent on their way. John Boyer’s mortuary took charge of the dead.

At 3 a.m., a wrecking train arrived from Norwalk to remove the debris. Late Sunday morning, railroad officials viewed the scene. By two o’clock, the tracks were cleared and repairs completed. A short time later, the line was up and running.

Despite numerous deaths and severely injured victims, there was no investigation, no policy change, and no new safety measures implemented. Tragic as it was, such accidents were not uncommon in the 1890s. Americans at the turn of the century were fascinated with technology’s steam, power, and speed. Trains could transport goods cheaply and reliably and travel to the far reaches of the country in record time. “Progress” and “a better life” had their price. Sometimes that price was extraordinarily high.
Posted by Nan Card at 12:54 PM 2 comments: