The Dillon House: A Legacy of Gracious Hospitality 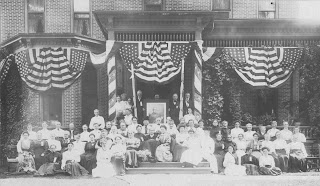 Among the fine Victorian homes that grace the streets of Fremont, Ohio is the Dillon House on Buckland Avenue. The Towered Second Empire design was the creation of local architect John C. Johnson. While Johnson was best known throughout the Midwest for his public buildings, he also received commissions to design private homes. It was Charles and Ann Buckland Dillon who asked Johnson to provide them with plans for a structure that at once expressed both warmth and elegance - one in which their growing family would enjoy the comforts of home and yet where friends could experience their gracious hospitality.

Ann Buckland, the daughter of prominent attorney and Civil War General Ralph P. Buckland married Charles Dillon in 1868. Dillon, part owner of a hardware business, was a druggist who founded what is today Grund Drug in Fremont.

The site chosen by the Dillons was one of several lots owned by Ann's father. It lay across from the Hayes Home situated on the grounds of Spiegel Grove. In the fall of 1873, then former Governor Rutherford B. Hayes wrote his sons that "Mr. Dillon was putting down the foundaton of his fine large brick house opposite to Spiegel Grove."

While the Dillons hoped to complete their house early the following year, construction took longer than expected. It wasn't until the fall of 1875 that the Dillons finally moved to their new home. Even then, the house wasn't finished. Despite delays, the Dillons achieved their goal. The elaborate pediments adorning the windows and detnal molding and cornices accentuating the roofline embellished the structure's understated elegance. Black walnut double doors brought from Michigan by Mr. Dillon created an impressive entranceway. Butternut woodwork filled the home's foyer, cozy alcoves, and stately rooms with a warmth that nearly glowed.

Perhaps no event reflected the Dillons' refined entertainment more than the wedding of their eldest daughter Mary to Irvin Fangboner. More than a hundred guests celebrated the couple's marriage at a "white and green" event held during the holiday season of 1898. The home was a profusion of white roses, carnations, and chrysanthemums. A bower of greens graced the downstairs parlor along with palms, ferns, and holly. At the top of the stairway, Mr. Dillon installed a beautiful leaded glass window for the occasion. Carrying white roses, Mary descended the stairs to the front hall and entered the parlor where the couple said their vows beneath the bower. 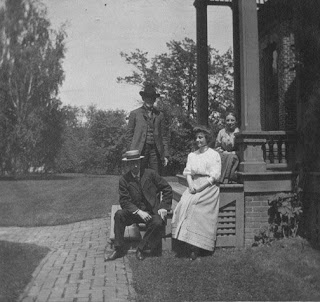 After the death of General Buckland, Ann and her younger brother George hosted reunions for their father's Civil War comrades of the 72nd Ohio Volunteer Infantry. The Dillon home nearly overflowed with veterans and their families. Food, drink, and song were the order of the day. Women chatted and children played games on the lawn while the old soldiers gathered on the porches to remember long ago days of hard fighting.

Members of the Dillon family called 1329 Buckland Avenue "home" until 1960, when Charlotte Dillon Ickes, the youngest of Charles and Ann's daughters passed away. Purchased by the Hayes Presidential Center two years later, the Dillon House remains a gracious setting for spedcial occasions, echoing the warmth and hospitality of its former owners.

The ambience that the Dillons once enjoyed can stll be experienced at a Dillon House Tea or through rental for private events or business functions.