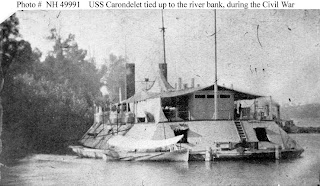 U.S.S. Carondelet
(Courtesy of the Naval Historical Center)
﻿When attempting to document the Civil War service of Sandusky Countians, it was difficult and at times impossible to identify those who served in the U. S. Navy. Unlike infantry regiments that were largely formed from specific geographic areas, there were few clues leading to the enlistments of Navy personnel. Generally those identified came from post-war biographical sketches, county histories, obituaries, records of veterans’ organizations, service records, and extant diaries and letters preserved by descendants. A recently discovered obituary appearing in the January 26, 1899 issue of the “Clyde Enterprise” revealed the extraordinary naval service of Sandusky Countian John Evans. Evans resided on East Street in Clyde, Ohio, where he died at the age of 72.
John Evans was born in Ireland, May 1, 1826, of English parents. He entered the English navy about 1850, serving for six years, part of the time during the war between the allied powers and Russia known as the Crimean War, and was in the siege of Sebastopol. After the close of the Crimean War, he was discharged and came to America, settling at Sandusky, Ohio in 1857, where he lived until 1861. He enlisted in the U.S. Navy at New York December 18, 1861 and served for over three years, being in the Mississippi and Gulf squadrons under Porter and Farragut, taking part in the naval engagements at Island No. 10, April 8, 1862; Fort Pillow May 10, 18626; Memphis, June 5, 1862; Vicksburg, May, June and July, 1863; and in the Red River Expedition under General Banks, where the Navy under Porter saved Banks’ Army from complete destruction.

After his discharge he lived in Fremont, Ohio, two years, then moved to Sandusky where on February 1, 1869, he was married to Mrs. Nancy E. Reed. One year later, they came to Clyde, which has since been his home. He wife died in 1887, since which time he and his daughters have lived in the home on East Street where he died.

Besides possessing a remarkable naval and military record, deceased was an industrious, hard-working man, who had the respect of all who knew him. One daughter, Maria Evans, and four step-children survive him.

She was an ironclad river gunboat, was built in 1861 by James Eads and Co., St. Louis, Mo., under contract to the War Department; commissioned 15 January at Cairo, III., naval Captain H. Walke in command, and reported to Western Gunboat Flotilla (Army), commanded by naval Flag Officer A. H. Foote.


Between January and October 1862 Carondelet operated almost constantly on river patrol and in the capture of Forts Henry and Donelson in February; the passing of Island No. 10 and the attack on and spiking of the shore batteries below New Madrid, Mo., in April; the lengthy series of operations against Plum Point Bend, Fort Pillow, and Memphis from April through June, and the engagement with CSS Arkansas on 15 July, during which Carondelet was heavily damaged and suffered 35 casualties.


Transferred to Navy Department control with the other ships of her flotilla on 1 October 1862, Carondelet continued the rapid pace of her operations, taking part in the unsuccessful Steele's Bayou Expedition in March 1863. One of those to pass the Vicksburg and Warrenton batteries in April 1863, Carondelet took part on 29 April in the five and one-half hour engagement with the batteries at Grand Gulf. She remained on duty off Vicksburg, hurling fire at the city in its long siege from May to July. Without her and her sisters and other naval forces, the great operations on the rivers would not have been possible and Northern Victory might not have been won. From 7 March to 15 May 1864, she sailed with the Red River Expedition, and during operations in support of Army movements ashore, took part in the Bell's Mill engagement of December 1864. For the remainder of the war, Carondelet patrolled in the Cumberland River. She was decommissioned at Mound City, III., 20 June 1865, and sold there 29 November 1865.

The "Bootlegger," 1929 26-foot Dart
﻿Sponsored and organized by Ramsey Brothers Restorations of Toledo, Ohio, the Fifth Annual Antique and Classic Boat Show took place on the weekend of August 27th and 28th. This year's featured boat was the Dart, a stylish vessel first built in Lima, Ohio, at the Indian Lake Boat Company and later at Toledo, Ohio by a group of investors headed by Admiral Webb Hayes, grandson of President Rutherford B. Hayes. Read more about the famed Dart boat by following this link to an earlier post where you can also see a 1928 video of the Hayes family in a Dart on Lake Erie.
Perhaps as few as 35 Darts exist worldwide. Thanks to the efforts of the Ramsey Brothers and Dart owners, visitors were treated to the rare opportunity of seeing FIVE Dart Boats in one location! The video clips immediately above and below are of the "Bootlegger," a 26- foot 1929 Dart.
The "Bootlegger" 1929 26-foot Dart
Below is a video clip of an unrestored 22 1/2-foot Dart, once owned by the United States Coast Guard and used during Prohibition to chase down bootleggers hauling liquor across Lake Erie from Canada to the U.S. Owner Scott Ramsey displayed this great classic at the boat show.
Scott Ramsey's 22-1/2 foot Dart once owned by the U. S. Coast Guard
Check out the Youtube footage of Scott Ramsey putting his 1927 unrestored Dart through her paces on the Maumee!
http://www.youtube.com/watch?NR=1&v=USd2S3eJFoU
Two more rare Dart boats on view at the 5th Annual Toledo Classic and Antique Boat Show
Special thanks go to Ramsey Brothers Restorations for making it possible for so many to see these vintage boats that not only included the rare Dart, but also restored Lymans and Chris Crafts that are so much a part of the heritage of Great Lakes recreational boating. Owners came from Indiana, Michigan, Ohio, and Florida to display their classics. The weekend show also included displays of historic Great Lakes lighthouses, shipping, postcards, books, and memorabilia; great food and music; and antique autos.
﻿
Posted by Nan Card at 7:25 PM No comments:

On August 18th, residents of Fremont, Ohio and the surrounding area celebrated the release of the new Presidential $1 Coin honoring Rutherford B. Hayes, 19th President of the United States. “The Presidential $1 Coin series connects us to the wellspring of our nation’s government and the many stories that unite us,” said Marc Landry, Acting Associate Director of Manufacturing of the United States Mint. “One of those is captured here at Spiegel Grove, the beautiful home where President Rutherford B. Hayes retired from elected office but remained a dedicated public servant, helping veterans, improving prisons and fighting for universal education. Over 400 people joined Hayes Presidential Center Director Tom Culbertson, Sandusky County commissioners Terry Thatcher and Dan Polter, Fremont Mayor Terry Overmyer, U. S. Representative Bob Latta, and Ohio State Representative Rex Damschroder for the official coin launch.
Free dollar coins were available to children 18 and under who attended the ceremony on the front lawn of the Hayes home, while Fremont-based Croghan Colonial Bank was on site to exchange dollar bills for the new Hayes coins for everyone else. The bank had nearly sold out of the 12,000 coins it brought to Thursday's event, although the Hayes coins will be available at the bank's main branch.
Posted by Nan Card at 1:45 PM No comments: 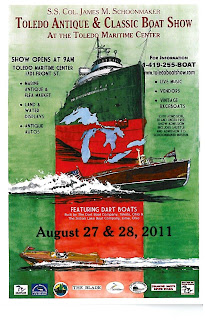 ﻿On August 27th and 28th, Toledo, Ohio's annual Antique and Classic Boat Show takes place at Toledo's Maritime Center at 1701 Front Street on the banks of the Maumee. It's a treat! You'll see some of those great vintage  boats from the 1920s to the 1960s that were so much a part of summer recreation on the Great Lakes.
This year, the focus will be on the DART BOAT. From 1928 to 1932, Admiral Webb C. Hayes II, grandson of President Rutherford B. Hayes, headed a group of investors who built the famed Dart (first built at Indian Lake Boat Company in Lima, Ohio.) The Dart was offered in four models – an 18 ½-foot; 22 ½-foot; 26-foot and 30-foot, ranging in price from $1,500 to $5,000. There were three-cockpit, split-cockpit, open and sedan models to choose from. The queen of the fleet was the 30-foot Gold Dart with its 125 horsepower Chrysler Imperial engine. You can read more about the Dart on our earlier post by clicking on this link. You will also enjoy the displays of books, postcards, and artifacts of the Great Lakes as well food, music, and antique autos! It's a great way to spend the weekend!

﻿ ﻿﻿The above 16" x 20" image is believed to be that of Casper Miller of Ballville Twp. Sandusky County, Ohio. It was recently donated to the Hayes Presidential Center by Harriet Stiger Liles of Coral Gables, Florida. The photograph was given to Mrs. Liles in 1965 by one of Casper's granddaughters, Helen Miller Newman, the daughter of John Henry and Mary C. Miller. Mrs. Newman and Mrs. Liles taught at the Old Fort School in Old Fort, Ohio.
Casper Miller was born in Switzerland October 5, 1832. He came to the United States in 1854 and became a naturalized citizen. He married Mary A. Diehr March 4, 1858. Mary was born in Germany January 6, 1839. She was the daughter of John and Mary Diehr, also of Ballville Twp. Casper and Mary Miller were the parents of Louis, Willie, John Henry, and Rosie.
Casper died in Ballville Twp. Sandusky County September 13, 1910. Mary Diehr Miller died in Ballville Twp. February 6, 1917. Both are buried in the McGormley Cemetery.
A single individual by the name of Casper Miller appears on a list of Civil War draftees for Sandusky County. The document is part of the Local History Collection at the Rutherford B. Hayes Presidential Center. Casper Miller is believed to have enlisted as a private in Company C of the 72nd Ohio Volunteer Infantry raised largely in Sandusky County, Ohio.
Posted by Nan Card at 6:00 PM 3 comments: