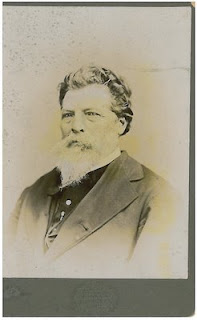 Born in Hudson, Ohio in 1821, John Brown, Jr., eldest son of the abolitionist John Brown, took part in the violent struggle in Kansas between the free-staters and the proslavery faction. However, he and his brothers Salmon and Jason and brother-in-law Henry Thompson refused to join the raid on Harper's Ferry. John Brown, Jr., served as agent of Emigration for the British North American Provinces in 1860-1861, where he labored on behalf of African Americans as well as Native Americans. Brown wrote the following letter to his wife, Wealthy (Hotchkiss) Brown from Chatham, Ontario. Working under James Redpath as an agent for the Haitian Bureau of Emigration, John Brown, Jr. recruited African Americans in and around Chatham to emigrate to Haiti. Brown later resigned his position as recruiting agent and took a group of "New York sharpshooters" to Kansas, where he and his men were attached to the Seventh Kansas Cavalry. But within a short time, Brown fell ill and was forced to resign his captaincy. In 1862, John Brown, Jr., purchased a ten-acre plot on the south shore of South Bass Island at Put-in-Bay, Ohio. His sister Ruth and her husband Henry Thompson also settled at Put-in-Bay. Later, Owen Brown, who had participated in the raid at Harper’s Ferry, joined them. Owen lived in a small cabin on his brother’s land; he spent the winter months on nearby Gibraltar Island serving as the caretaker of Jay Cooke’s summer home.

John, Jr., remained on the island until his death in 1895. He farmed, harvested grapes, practiced surveying, taught science and mathematics to the islanders, and lectured on temperance and slavery.

Ever Dear and faithful Wife,

It is now Friday evening, and I trust before another Friday Eve I shall be on my way to my much loved home once more. Indeed I have long been counting the days. I expected to have been here last Monday, but could not get ready to leave Chatham until this morning. Reached here about 11 o’clock this afternoon and found your dear letter of the 13th, also enclosing once from Jennie to you. I also found here seviral letters from persons in this region who propose going to Hayti. Also, two from Boston, one from Mr. Newton and one from Mr. Redpath. But as you are the only prompt and faithful correspondent I have, I shall answer you first of all. I sent you a paper from Chatham this morning, and one a day or two before. Have read here the paper Called “the sacrifice”, and one of same name from Mrs. H. F. M. Brown. I would now give you the items of my Journal for several days past, but as I shall probably see you so soon I will defer until I see you. It is late at night and all save me have gone to bed. I presume Johnny is by this time fast asleep. How I do want to see you. Tell him I have bought a little axe for him and will bring it home next week in my trunk. I can almost hear him say “Ma, when will next week come?” Tell him that in 7 days more I hope to see him.

I am getting along well in getting emigrants for Hayti. Ones 50 have signified this determination to go from Chatham, and many will go from Dresden, Boston, Rondeau &c, though the greater number will not be ready to leave before Fall.

There are about 20 who intend leaving this place for Hayti in May. The Free Press Came out in another scurrilous article about me shortly after I left here for Chatham. Stating that, I had finally left this part of Canada, without so much as getting a single donkey to go to Hayti. I have nothing more to say to the Press. The Editor is infinitely beneath notice from henceforth.

It will really afford me a resting spell to get once more to a land where prejudice against Color assumes a milder type than it does in Canada. Indeed, if I were myself as black as ebony should not receive more undisguised coldness from the white inhabitants here than I now do, and this simply because I treat the colored man as an equal socially. In all of Canada West, a man would be read out of what they call “Good Society” who should ask a Colored man or woman to eat at the same table with him. In consequence of my boarding and lodging at their Houses, and in the street and at all places meeting them on terms of social equality, I have scarce been recognized by the white inhabitants here, as belonging to the human family. Every where I have met the cold shoulder. It is perhaps well. I am thereby enabled to sympathise with these people in their experience of a new form of Slavery, at least to me. “Man’s inhumanity to me makes countless thousands mourn.”

Tomorrow, I shall answer letters all day. _ On Monday go to little river settlement, and meet a number of those who wish to go this Spring to Hayti. I have just learned that a white man has made an appointment for a meeting in that settlement next week, at which meeting he proposes to prove that I am not John Brown, but an imposter, who is trying to get the colored people away from Canada and back into Slavery. If it is convenient I shall try and attend that meeting, and so find out with certainty who I am. 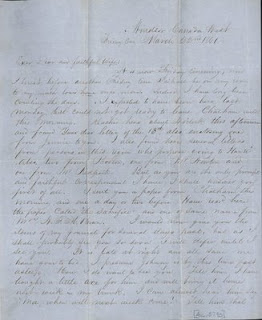 Well it is getting very late and I will once more bid you goodnight. I may write again before I leave and may not. _ Give to Mr.& Mrs. Smith Edwards my very warm regards. I hope soon to “greet the bride with a holy Kiss” _ Say to Martha, that the long letter she promised to write me, must have miscarried. Perhaps Smith, forgetting to mail it, yet has it in his pocket. If I keep on writing I may fill out my sheet. I dont want to go to sleep, and yet I must or be unfitted for business. It is now nearly three months since I left home. Well do I remember the time Johnny stood in the Road and kept looking into the Hack as long as he could see me. Don’t let him forget me._ These three long months without companionship, its awful. If it had not been for your letters I don’t know how I could have endured it. What a dear thought, that this is some one whose sympathies go out to us ever faithful and true. ­­_ One such, makes all the rest of the world look poor.

If I can get a moments time I shall send you another letter before leaving here. Mr. Redpath wants me to stay until the middle of April, before returning to Ohio, but I had made up my mind to go home at the time I wrote you, and no ordinary event shall prevent me.

Mr. Anderson accompanied me to the cars at Chatham to day. he sends his kindest regards to you and Owen, and Johnny and to the Edwards family_ Shall look for a letter from you up to the time I leave. Hug Johnny for me “real right”, and believe me ever faithfully
Your loving husband
John Brown Jr.
Posted by Nan Card at 1:26 PM 4 comments: