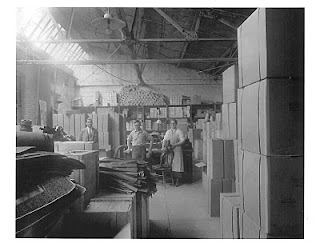 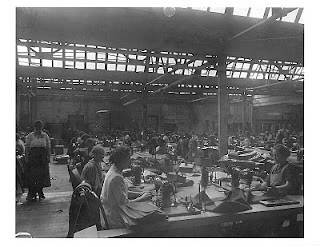 Hodes Zink Manufacturing Company
Fremont, Ohio
May 1923
(Seamstresses: Woman standing at left is Mayme Young Newberger, head forewoman, who was employed at the company from 1919 through 1953.)

The Hodes-Zink Manufacturing Company began operations December 1917 at a second floor location in downtown Fremont, Ohio. A. K. Hodes and Howard E. Zink were equal partners in the business with Hodes overseeing production and Zink focusing on sales of their products. The company’s first major products were storm fronts for buggies but they soon expanded into producing accessories for newly popular automobiles. Some of these accessories included radiator and hood covers, top recovers, and rear and side curtains for touring cars and roadsters. The Hodes-Zink Company developed a system of using patterns of each model and mass producing each item which were sold under the trademark Sure-Fit.

The company prospered and grew. In 1921 they moved to the corner of Napoleon and Lynn Streets in Fremont, Ohio and in 1923 incorporated. Hodes-Zink Manufacturing Company opened a facility in Passaic, New Jersey in 1936 to service the eastern trade outlets and added a second plant in Fremont, Ohio on Jefferson Street.

A.K. Hodes died suddenly in late November 1938. With the purchases of his assets by Mr. Zink the company name was changed to the Howard Zink Corporation. Purchasing another plant at Charleston, Mississippi in 1939 the firm’s primary focus shifted to the production of automobile seat covers which were widely sold under local and national names. Other products were cushions, seat pads, mother’s utility bags, nationally famous baby pals, reflectorized outdoor highway signs, and advertising display signs. A west coast plant opened in 1945 at Long Beach, California and the Consolite Sign Division was purchased in 1947.

Upon the death of Howard Zink in 1957 Jack Zink became president and general manager of the corporation. With his physical condition a factor (Jack Zink suffered severe injuries to both legs in World War II), Jack Zink announced the sale of the company, with the exception of the Consolite Division, to Indian Head Mills January 1966. The company became part of Crawford Manufacturing. In the next 40 years the company went through several changes of owner and name: 1969-Starlite Industries bought the firm and changed the name back to Zink due to its reputation; 1977-the name was changed to Starlite; 1984-Wynn International took over the business and named it Wynn’s Automotive; 1986-Bestop, Inc. split from Wynn’s; 1989-Bestop split, selling half the company to Saddleman, Inc. which took the Fremont, Ohio facility and changed the name to LeBra Products. 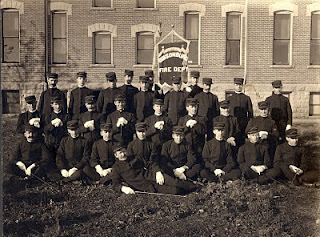 The village of Gibsonburg, Ohio, suffered devastating fires in 1895 and again in 1897 when many businesses were damaged or destroyed. As a result, a volunteer fire department was established in February 1898 for the purpose of providing fire protection to property in and around the village of Gibsonburg. The first equipment, hoses, a cart, and rubber coats and hats for the men, was ordered later that month. Initially the village was divided into three districts with a trustee overseeing operations in each of these districts and reporting to the fire chief. The department also formed a drill team. Henry Paul (in front of the team) was the drillmaster. This photograph is part of the Gibonsburg Volunteer Fire Department records donated by the organization in 1999 to the Hayes Presidential Center at Fremont, Ohio.
Posted by Nan Card at 12:57 PM 2 comments: 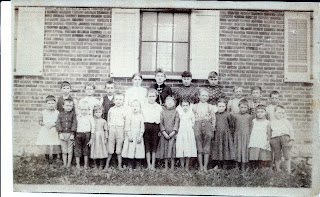 The above photograph is of students who attended the one-room school at Maple Grove in Liberty Twp. Seneca County, Ohio. The photograph was shared by Marcia Thomas of Connecticut. Her Paul family ancestors attended the school, located south of Bettsville, Ohio. Maple Grove was originally known as Linden, where a post office was established in 1874. The post office soon faded from existence. By 1886. the name became Maple Grove. It was the site of two railroad crossings.

Although this photograph is undated, the names of all of the children and the teacher are written on the reverse. The names listed here are given in the order written: 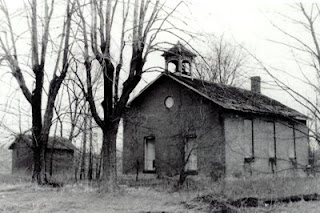