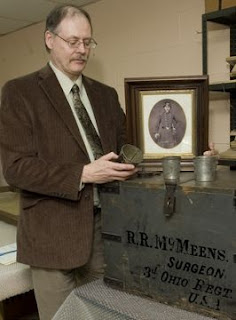 The Hayes Presidential Center commemorates the 150th anniversary of America ’s Civil War with the opening of its exhibit, CIVIL WAR: Battlefield & Homefront on April 12th, the date that marks the first shots fired on Fort Sumter . The Civil War touched the lives of all Americans. More than 300,000 men, nearly a tenth of Ohio’s citizens participated in the war.

Through the holdings of the Hayes Presidential Center and the L. M. Strayer Collection, Battlefield and Homefront explores the wartime experiences that changed forever the lives of Ohio soldiers and the families and communities who supported them.

The exhibit provides visitors with a deeper understanding of the sacrifices and suffering of soldiers and families who lived through four long years of war.

On loan from Civil War expert and dedicated collector Larry Strayer are photographs, documents, and artifacts of Northern Ohio soldiers. Included are the field trunk and a rare canvas and wood cot that belonged to Dr. Robert R. McMeens of Sandusky who served with the Third Ohio Volunteer Infantry and became Acting Medical Director of the Tenth Division. McMeens’ name appears on the cot that was patented in 1858.

Although desperately ill, McMeens refused a furlough, believing it was his duty to follow his “friends in their fate.” On the night of October 29, 1862, Dr. McMeens performed two surgical operations on soldiers wounded at the Battle of Perryville. Hours later, he collapsed and died. McMeens’ possessions, including his cot, were brought back to Sandusky by his devoted attendant.

Following his death, his widow Anna cared for soldiers in hospitals in Washington, D. C. Featured in the exhibit is her autograph book that is a part of the Hayes Presidential Center’s holdings. The book contains more than forty signatures of prominent individuals including that of President Abraham Lincoln.

Through decades of research, Strayer has gained extensive knowledge of Ohio’s role in the Civil War, its regiments, and the soldiers who fought for the Union cause. Strayer says “that the families of Civil War veterans and their descendants were more inclined to save martial artifacts such as guns and swords rather than cups, spoons, bedding, and cots” that were necessities in soldiers’ daily lives. Although it may take years to accomplish, Strayer finds it especially rewarding to once again, bring together groupings of individual soldiers’ Civil War possessions.

CIVIL WAR: Battlefield & Homefront is made possible through funding from Diversified Insurance and Auto-Owners Insurance. Exhibit hours are 9 am to 5 pm Tuesday through Saturday and noon until 5 pm Sunday. The Rutherford B. Hayes Presidential Center is located at the corner of Hayes and Buckland avenues in Fremont, Ohio. The facility is affiliated with the Ohio Historical Society.