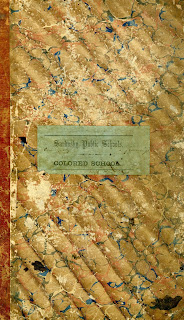 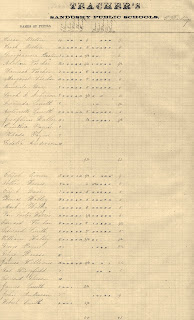 Above are scans of the cover and a record of students' attendance for the quarter beginning April 20th 1858 for the "Colored School" located in Erie County, Ohio. The ledger provides a record of students' attendance for the years from 1854 to 1858. Transcribed below are the names and ages of students listed on the above scan (April 20th 1858). Some names (not all) listed on this page appear as students for all all four years. Only a single teacher's name is given - E. Hastings. From the Sandusky Directory, the teacher of the "Colored School" was given as Eliza Hastings.

According to A History of Sandusky and Erie County, written by the late Charles E. Frohman, "small schools for Negro children had been maintained at irregular intervals by Negro directors, but in 1853, at the request of the Negro people, these schools were transferred to the city Board of Education. In 1861 they were discontinued by the Superintendent of Schools, and the Negro students attended classes in the regular school system." Considering the dates of the attendance ledger, it appears this record was kept after the school was transferred to the Board of Education.

No information is given in the ledger as to the location of the school, but with much assistance from Dorene Paul, Reference Librarian at the Sandusky Library and her Sandusky History blog, it seems logical that the school was located near Neil Street in Sandusky, not far from the St. Stephen AME Church at 312 Neil Street. From 1873 to 1876. Reverend Thomas Holland Boston, born in Maryland in 1809, served as minister of the St. Stephen A.M.E. Church and lived on Hancock Street. Reverend Boston's three daughters by his second marriage appear on the attendance register. 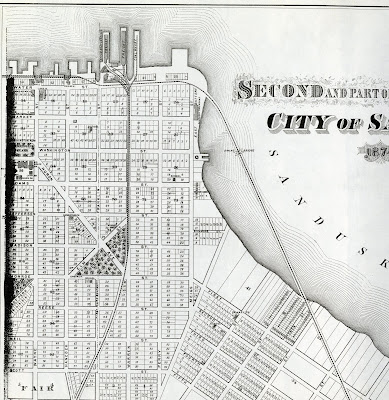 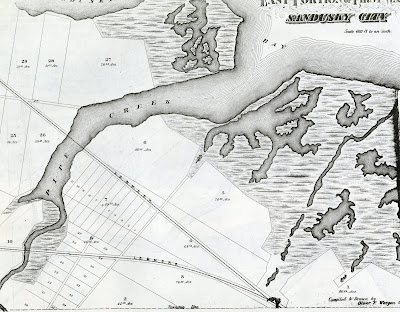 According to an article by A. W. Hendry titled "History of a Vanished Settlement" appearing in the July 1878 issue of the Firelands Pioneer, African Americans had arrived in the area  before 1838. Known locally as "Africa" because of the African American settlement, Hendry described its location as "then about two miles from the city, in a southeasterly direction, and across Pipe Creek." Hendry believed that by 1843, more than 100 individuals resided at the settlement. This settlement no longer existed by the 1850s. 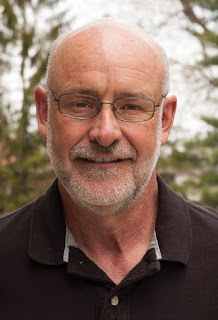 Educator and Local Historian Mike Gilbert’s popular series, History Roundtable, returns this fall! We are grateful to Dr. Mary Wonderly for once again making the sessions possible. Gilbert will offer six sessions on Saturdays Sept. 16 through Oct. 28 with the exception of Oct. 7. Pre-register with Nan Card or Julie Mayle by calling 419-332-2081
x 239. 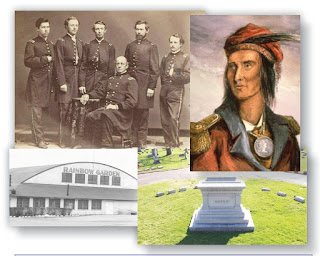 All sessions except for the Sept. 23rd Oakwood Trolley tours will take place in the Museum auditorium from 10. A.M. to 11:30 A.M. The cost is $5.00 for each session or $25 for all five sessions. THE OAKWOOD TROLLEY TOURS SPONSORED BY GEORGE SCHRADER ARE SOLD OUT.

Sept. 16 Facts, Myths and Legends: Learn about the known and unknown history of Sandusky County as Gilbert explores facts, urban legends and myths of the area. Help unravel stories from the past that have generated local and national interest.

Sept. 30 Hangouts: Mike will discuss the hot spots of local youth from the founding of the county to participants’ own high school days.

Oct. 14 72nd Ohio Volunteer Infantry: The beginning of the Civil War was a tumultuous time for the men and women of Sandusky County. Discover how the soldiers of the 72nd brought a sense of pride to their hometown as they fought their way through Shiloh and Vicksburg. Relive their agony at Brice’s Crossroads and Andersonville Prison as they made the long march back home.

Oct. 21 Native Americans: Sandusky County has a rich tradition concerning Native Americans in the area. Learn about the history of the tribes and the shaping of the community. Hear the stories of Chief Tarhe, Peggy Fleming, James Whittaker and others.

Oct.28 Ghost Stories: Mike brings back one of his most popular presentations. Just in time for Halloween, he will share local, state and national hauntings.
Posted by Nan Card at 9:16 AM No comments: