Join the Hayes Presidential Center for its annual observance of the Fourth of July by attending the Independence Day Concert.

Concert time is 2:00-3:30 p.m. Thursday, July 4 and features the Toledo Symphony Concert Band. The signature element of this annual event is the presence of Civil War reenactors who provide unique percussion to performance of the 1812 Overture by firing a series of cannon. The effect is thrilling!

Admission to the Independence Day Concert is FREE thanks to major sponsorship from Crown Battery and Hal & Diane Hawk . Additional support is provided by Mosser Construction Inc, Richard Binau Insurance & Financial Services, & United Ohio Insurance Co.
Attendees are reminded to bring their own seats and come prepared for the weather (sunscreen and/or bug spray.) Snacks and drinks can be purchased at a refreshment stand. Free parking is available on the grounds of the Hayes Presidential Center and adjoining city streets.

1913 Flood in Fremont and Tiffin, Ohio 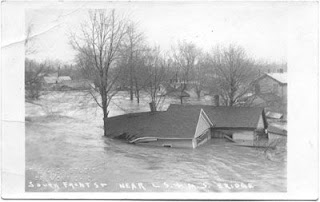 Homes Damaged on Fremont, Ohio's
South Front Street
Flood of 1913
In a guest post earlier, HistoricNaturalDisasters.com featured the devastation in Dayton, Ohio caused by the 1913 flood that wreaked havoc throughout much of the state. The torrential rains created severe flooding of the Sandusky River, that resulted in the destruction of 50 homes and damaged more than 550 more in Fremont, Ohio. Three individuals died in the flood, one of them after rescuing hundreds of flood victims.   The damage to the Ballville Dam, businesses, residences, county roads, and bridges reached more than $1 million. A few miles upriver, in Tiffin, Ohio, 19 lives were lost and 500 homes were damaged.

Now on Historypin, you can see a slideshow of 35 historic photographs from the Charles E. Frohman Collection, showing some of the destruction suffered by residents. The photographs were taken by Sandusky, Ohio photographer Ernst Niebergall

Called to action, the city police and fire departments monitored river conditions, warned residents to evacuate the area, and rescued people from homes and businesses. Help came from the local Company K, 6th Ohio National Guard, and after several days, further assistance was requested and received from Battery B of Toledo and from Cleveland's Troop A.

Chambers of Commerce in several Ohio cities and even Pittsburgh, Pennsylvania, sent aid. The New York Central Railroad assisted with communications, after long distance telephones went out. Relief was also received from the state of Ohio and the Red Cross. Churches and other organizations, such as the Elks, provided food and shelter. School rooms became temporary shelter for the sick when the hospital reached capacity.

Read more about the 1913 Flood in Fremont, Ohio at Sandusky County Scrapbook
Posted by Nan Card at 1:36 PM No comments: