When America entered the First World War, the Wilson administration launched a massive propaganda campaign against its enemy - Germany. Referred to as “Huns,” Germans were portrayed as inhumane on posters, leaflets, and in advertisements. With 1/3 of the nation’s population composed of immigrants, the federal government feared that many German Americans would become spies or assist the German war effort. The Justice Department kept a list of German aliens. More than 480,000 individuals appeared on the list, of which 4,000 were imprisoned for spying or supporting the German cause.  In its efforts to identify more spies and traitors, the federal government soon began suppressing the German culture.

The campaign worked splendidly. Cities across America went to great lengths to show their allegiance to the United States and help root out spies and sympathizers. Businesses, streets, and towns with German names were changed. Some libraries removed German books from their shelves. The German language was frequently banned in churches and schools. Many with German surnames soon began to Americanize them.

In Sandusky County, Ohio, some German Americans were looked upon with suspicion and attacked for refusing to swear allegiance to the U. S. The most serious incident occurred in the spring of 1918 when a German resident was overheard in a downtown bar supporting the Kaiser. A crowd chased him to another bar, finally capturing him. They took him to his tailor shop. There he was forced to his knees and ordered to kiss the American flag. Defending himself with a club, he declared that one of his sons was in the service and that he himself was actually Russian! But the mob was having none of it. They threw the tailor down the stairs and stuffed the flag down his throat. They then decorated his shop with an abundance of American flags. The “Daily Messenger” wrote that the sheriff housed him for a short period in the city jail for his own protection.

The Sedition Act covered a broad range of offenses, including speech and expression of opinion. Only federals could enforce the Sedition Act, but local law officials were compelled to identify and report to the Justice Department those they believed disloyal to the United States. This increased tensions everywhere. Locally, the angry mob moved on to interrogate the loyalty of Rev. Erwin Marker of St. Mark Lutheran Church, Rev. U. S. Bartz of the First Presbyterian Church, Charles Maule who had celebrated after early German victories, and “German Courier” editor Vollmer. Their suspicions were unfounded and nothing came of it.

It wasn’t long before cooler heads prevailed, first in Gibsonburg, Ohio and then in Fremont. By week’s end, “vigilance” committees were formed. Their purpose was two-fold: to prevent loyal German Americans from being humiliated and to identify those suspected of treason. An enormous “Liberty Parade” was organized for Patriot’s Day. Thousands poured into the streets with flags flying! The local papers featured the event as a patriotic celebration. In reality, those suspected of German sympathies were compelled to demonstrate their allegiance by kissing the American flag, purchasing war bonds, and supporting the Red Cross

As the war turned against the Central Powers and the Sedition Act was repealed, emotions subsided across the country. There were those who secretly believed the government’s tactics had been too heavy handed. Some resented the severe repression of speech. Most German Americans went on with their daily lives, eventually forgiving their neighbors for the hard feelings harbored against them. But in the process, many treasured German traditions were lost forever.

Some years ago, I researched more than two dozen African American soldiers who served in the Civil War who either enlisted from or resided in Sandusky County, Ohio. You can read short sketches about each of them on the Hayes Presidential Library & Museums website. What proved to be most frustrating was my search for pictures of these courageous men who enlisted midway through the Civil War. By mere happenstance, I discovered a photograph of one of these soldiers taken long after the war and for a totally different purpose! That Civil War veteran was David J. Vance who was born in 1839 in what became Lewisburg West Virginia.

The picture in which David Vance appears is one of a series of staged images taken in 1903 of well-known Sandusky County physician Dr. Charles R. Pontius. Pontius was apparently thrilled with his beloved “Winton” automobile. In addition to the "Winton,” a horse named “Kitty,” and an electric street car are featured in the photograph. The picture was intended to show viewers the rapid evolution in transportation that was taking place at the turn of the century. But of course, none of this immediately of interest. It was the friend sitting beside Dr. Pontius in the “Winton,” who was identified as Vance – the first and only picture I had located of one of Sandusky County’s African American Civil War veterans. I am hoping I will discover more images of these brave men!

Vance enlisted in the 44th U. S. Colored Regiment that was formed at Chattanooga in 1864. The regiment fought at battles near Dalton and Rome, Georgia and at Nashville. Serving a total of 19 months, Vance was discharged in August 1865. He returned to Sandusky County where he worked as a laborer and then a shoemaker. In 1882, he married Jane Whetzel Keys. She was the daughter of Felix and Lavina Newsome Whetzel and was born near McCutcheonville, Ohio.


To add to their income,he Vances rented rooms to several boarders and Jane worked as a hair dresser. At the age of 56, David Vance joined the local Eugene Rawson Post of the Grand Army of the Republic. He remained a member in good standing until his death in January of 1904. Jane lived until the age of 91. Both David and Jane are buried in Fremont, Ohio's OakwoodCemetery. 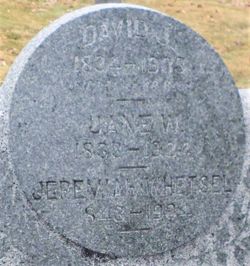 Courtesy of Find a Grave

A version of this article appeared in Lifestyles 2000.