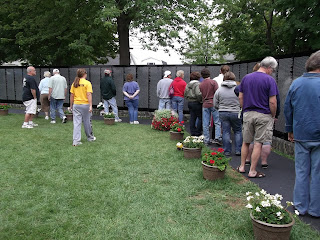 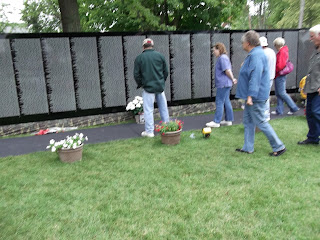 Vietnam Combat Veterans Moving Wall at Elmore, Ohio
August 11, 2012
Ron Distel, who served in Vietnam and is the commissioner of the Ottawa County Veteran’s Service Commission coordinated the effort to host the Vietnam Combat Veterans Moving Wall in Elmore, Ohio from August 9 - August 13.  Deepest thanks go out to volunteers and donors for  a nearly  three-year effort to bring the "Moving Wall" to Elmore, Ohio.
On an overcast Saturday, many walked quietly, respectfully, looking for a name - touching a name of a fallen hero who made the ultimate sacrifice for their country and their comrades.  Mr.  Distel says that the Wall has an amazing effect on those who see it. "It's a healing experience...hallowed ground. A piece of our life that we left over there. All of us have buddies whose names are on that wall."
And so it is. We remember. We pay tribute. 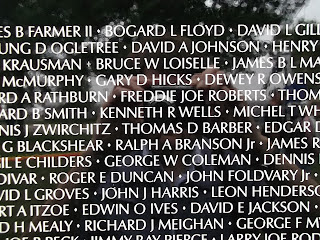 2nd Lt. George W. Coleman, U. S. Marine Corps
December 5, 1942 - March 17, 1968
Silver, Star Citation
Silver Star, Awarded posthumously, for actions during, the Vietnam War: The President of the United States of America takes pride, in presenting the Silver Star, (Posthumously) to Second, Lieutenant, George W. Coleman, (MCSN: 0-103411) United States, Marine Corps, for conspicuous gallantry and intrepidity, in action, while serving as a Platoon, Commander, with Company D, First, Battalion, Seventh, Marines, FIRST, Marine Division, (Rein.) FMF., in connection with combat operations, against the enemy, in the Republic, of Vietnam, from 4, January, to 17, March 1968. Participating, in several major, combat operations and numerous small, unit operations, Lieutenant, Coleman displayed, outstanding leadership and professional ability, while leading his men against, the enemy. Working tirelessly and with faultless, attention, to detail, he skillfully trained and instructed, his men, in general, military subjects and small, unit tactics, which greatly enhanced the combat, effectiveness, of his unit. On 17, March 1968, during Operation WORTH, Lieutenant, Coleman's platoon made contact, with a well-entrenched, North, Vietnamese, Army force and sustained, several casualties. He fearlessly moved, about the hazardous area deploying, his men and directing their fire upon, the hostile positions. Observing several wounded men lying, in an area dangerously exposed, to the enemy, fire, he courageously maneuvered, across, the fire-swept, terrain and on two separate occasions, carried casualties, to positions, of relative safety. Ignoring the hostile rounds impacting near him, he began moving toward another injured man and was mortally wounded by enemy automatic weapons fire. His bold initiative and sincere concern for the welfare of his comrades inspired all who served with him and were instrumental in saving the lives of several Marines. By his courageous and efficient leadership and unwavering devotion to duty in the face of overwhelming odds, Lieutenant Coleman upheld the highest traditions of the Marine Corps and of the United States Naval Service. He gallantly gave his life for his country. Action Date: January 4 - March 17, 1968 Service: Marine Corps Rank: Second Lieutenant Company: Company D Battalion: 1st Battalion Regiment: 7th Marines Division: 1st Marine Division (Rein.), FMF
Mar 17, 2010
Posted by Nan Card at 7:17 PM No comments:

Della Barber: Teacher for the Freedmen 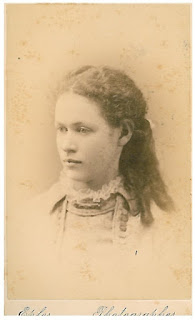 Della Barber
(Colonel Seth M. Barber Collection)
When Della Barber passed away in Norwalk, Ohio in 1928, her obituary stated that she was a “teacher” and “highly respected.” No truer words were ever spoken. But they did not begin to tell her story. Born shortly before the Civil War into a well-educated and deeply religious family, Della Barber committed her life to teaching the children of former slaves. She chose to leave Ohio at the age of 25 and travel alone to Concord, North Carolina where she began her career at Scotia Seminary
Established in 1867 by the Presbyterian Board of Missions for Freedmen, Scotia educated young African American girls in “religion and in the arts and sciences usually taught in seminaries of a high order.” In fact, the board modeled the school after New England’s Mount Holyoke. New students were astounded to see their teachers - white and African American, dining and socializing together. The board believed that whether its students became Christian teachers, social workers, nurses, wives, or mothers, Scotia graduates would pass on their knowledge to the next generation. Della Barber was one of the six teachers responsible for educating more than 200 young women at Scotia. 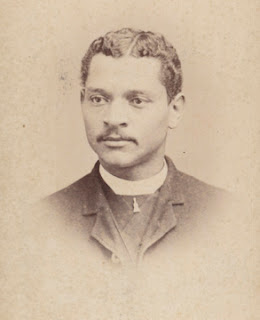 Unidentified Photograph from Della Barber's Album
North Carolina, dtd.1883
Four years later, the Board of Missions sent Della to Point Coupee, Louisiana to open a new school. It was a rude awakening for the young Ohio missionary teacher. Northern congregations sent books, clothing, and money, but it was not enough. Della labored, often alone against poverty and growing racial tensions. Even though the school was strongly supported by prominent Creole families, intimidation and threats on Della’s life forced the Board of Missions to give up its efforts at Point Coupee in 1892. 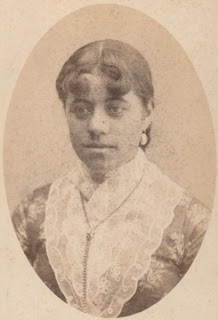 Unidentified Photograph from Della Barber's Album
North Carolina, no date
Della found safe haven at the church’s Mary Holmes Seminary in West Point, Mississippi. Ever the devoted teacher, she worked to secure funds so that of some of her Point Coupee students could join her or board at other Presbyterian schools.

Finally, Della was appointed to the Mary Allen Seminary in Crockett, Texas. The town of Crockett donated land. The Board of Missions funded the seminary’s construction. The curriculum prepared young women for teaching. Later, courses for elementary and secondary students were added. Eight teachers conducted classes for more than 200 students. The death of the school’s president in 1910 and a devastating fire a short time later sent the seminary into decline.

After more than 30 years, Della Barber retired and returned to Norwalk, where she lived with her brother. She continued to keep in touch with her colleagues and former students. Many became the educators she had envisioned.

Some criticized the Presbyterian Board of Missions for Freedmen for not challenging the segregation that increased as Jim Crow laws took hold in the Deep South. Others believed the opposite: by ignoring racial tensions around them, efforts to educate the first generation of young African American women grew and flourished in the first critical decades after the Civil War.
Posted by Nan Card at 1:23 PM No comments: 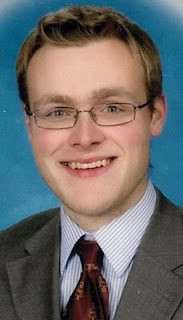 Brian Matthew Jordan
The Battle of South Mountain (Sept. 14, 1862) was the precursor to Antietam. It also was the conflict in which Rutherford B. Hayes suffered the most serious of his five Civil War wounds. Yet, most histories of the war devote little time and attention to South Mountain ... until now.

Jordan made use of the Manuscripts Collections at the Hayes Presidential Center in his research. He now returns to the Center to discuss his findings during a free lecture at 3 p.m. Sunday, August 19 in the Hayes Museum. A book signing follows the talk. Copies of Unholy Sabbath can be purchased in the Museum Store. 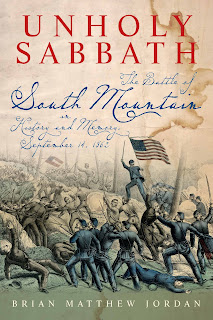 Unholy Sabbath: The Battle of South Mountain in History and Memory
In his third year of the history Ph.D. program at Yale University, Jordan is a native of Tallmadge, Ohio. He received a bachelor’s degree (summa cum laude, valedictorian) in history with a minor Civil War Era Studies from Gettysburg College in 2009. He is a frequent speaker at Civil War Round Tables nationwide, delivers tours for Gettysburg College’s Civil War Institute, and the Gilder Lehrman Institute of American History. He also conducts seminars for various Teaching American History programs. His published works have appeared in Civil War History and the Pennsylvania Magazine of History & Biography .
Posted by Nan Card at 8:43 AM No comments: 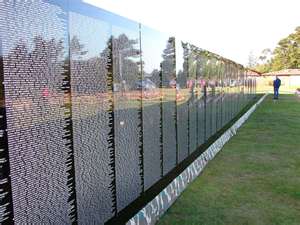 Vietnam Combat Veterans Moving Wall
On August 9th, 2012, The Vietman Combat Veterans Moving Wall will begin its journey at 10:00 a. m. from the Port Clinton, Ohio Municipal Building (1860 E. Perry St.) escorted by hundreds of motorcyclists-most of whom are Vietnam Veterans. At approximately 10:30 a. m. the Moving Wall and its escorts will be entering the business district of Oak Harbor, Ohio. The Moving Wall will then travel St. Rt. 163 and St. Rt. 51 to Genoa, Ohio where it will pass through the business district at about 10:55 a. m.The final leg of the trip will be from Genoa to Elmore using St. Rt. 163 and St. Rt. 51 It will arrive in downtown Elmore, Ohio at approximately 11:15 a.m. The Wall will then go to Depot Park. Opening ceremonies for the five-day visit will be held at 3:00 p. m.
Ron Distel, past Commander of Elmore Legion Community Post #279 which is sponsoring The Wall visit, has spearheaded the effort to bring the memorial to Elmore. Distel, served in Vietnam and is the commissioner of the Ottawa County Veteran’s Service Commission.
The Moving Wall is a half-size replica of the Vietnam Veterans Memorial Wall in Washington D.C. There are 58,267 names on the memorial of which 253 are from northwest Ohio. 3,095  Ohioans were killed in the Vietnam War. Over 2.7 million Americans served in Vietnam from 1959-1975.
The schedule for the Vietnam Veterans’ Moving Wall:
Thursday, Aug. 9: 3:00 Opening ceremonies hosted by HMMUSIC Ltd.
Friday, August 10: 7:00 Ceremonies Hosted by Area American Legion Posts
Saturday, August 11: 7:00 Ceremonies Hosted by Vietnam Veterans Chapter #35
Sunday, August 12: 7:00 Ceremonies Hosted by Area VFW’s
Monday, August 13: 2:00 Closing Ceremonies
Organizers have put together several events to help educate others about Vietnam and American war history. These events will be held at different locations in Elmore.The Northcoast Veteran’s Memorial and Museum from Gibsonburg, Ohio will display memorabilia from the Vietnam era at the Elmore Historical Society Depot and will also have a display from several area veterans at the Harris-Elmore Public Library. Storefront windows in the business district will also have displays from Elmore area veterans who served in Vietnam.