﻿﻿Sandusky, Ohio, was the largest ice producer west of New York City during the latter half of the 19th century. Noted for its solid, "crystal blue, clear as glass" ice, the city became known as the "Ice Capital of the Great Lakes." Icemen eagerly watched the waters of Lake Erie until they froze to a depth of 8 to 16 inches. For as long as "good ice makin' weather" held, Sanduskians endured ten-hour days of harsh winds and frigid temperatures for a daily wage of $2.

In the picture above, taken during the winter of 1911 or 1912, many local dealers from Sandusky and neighboring towns filled their orders by loading their delivery wagons directly from the ice fields.

Sanduskians harvested 400,000 tons of ice each winter. The greater portion of the harvest was stored in some fifty sheds that dotted Lake Erie's shoreline. Sandusky provided most of Ohio's cities with ice, including 90 percent of the ice consumed by the city of Cleveland. According to the local paper, Sandusky's "crystal quality put the murky, sewer-tainted" Cleveland ice to shame. Most of the ice was shipped across the lake as needed from a string of icehouses located on Put-In-Bay's Peach Point.
Posted by Nan Card at 7:54 PM No comments:

Mackin moved to Norwalk, Ohio in 1935. He began writing a memoir of his WWI experience. Excerpts from his manuscript, "Flashes and Fragments," appeared in Leatherneck Magazine. Essays that appeared later in the American Heritage magazine caught the eye of Marine Corps historian George B. Clark. Believing that Mackin's memoir provided a unique viewpoint of the war - "an enlisted man's viewpoint" and that of a "young man who suffered." Clark sought out the Mackin family. Although Private Mackin had passed away in 1974, his son, Wallace Mackin, shared the memoir and the taped oral interviews. The oral account assisted Clark in developing annotations for the manuscript that was eventually published in 1993 as Suddenly We Didn't Want To Die: Memoirs of a World War I Marine. ﻿

Elton Mackin’s oral interview was conducted by the late Carl D. Klopfenstein, Professor of History at Heidelberg College. The interview was conducted at Mackin’s home at 116 Milan Avenue, Norwalk, Ohio on June 29, 1973. Following the interview, a rough draft transcription was produced. Using the draft and the audiotapes that are part of the Elton Mackin Collection at the Hayes Presidential Center, the digitized transcription was created. It is available by following this link.  Due to the poor quality of the audiotapes,  errors exist.
Posted by Nan Card at 2:27 PM No comments:

A Game of Hockey on Sandusky Bay 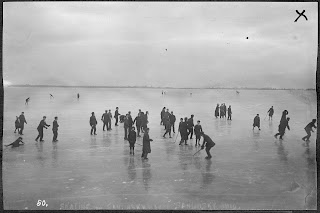 Generations of Sanduskians have enjoyed the bay - summer and winter. This image produced from one of the late Ernst Niebergall's glass plate negatives shows Sanduskians of all ages skating and enjoying a game of hockey on the frozen bay.