Lou Schultz
Lou Schultz whose extensive collection of War of 1812 materials is the core of the current Hayes Museum exhibit War of 1812 on the Ohio Frontier is guest speaker for a 2 p.m. Sunday, June 2 lecture in the Hayes Museum. Admission is free. All are welcome.

Schultz’s interest in the war’s history began at an early age. In the third grade his school visited sites related to the war including the Hayes Presidential Center. The inspiration of that trip led to a lifelong passion that included collecting artifacts and manuscripts from the war. The bicentennial of the War of 1812 has further ignited Schultz’s interest. He not only helped the Hayes Center create its exhibit, but also is a member of Ohio’s War of 1812 Bicentennial Commission.

His lecture focuses on the fact that Ohio was the scene of many of the major engagements of the War of 1812 in the Northwest. Not only did the British and their Native American allies invade Ohio on several occasions, but also it was from Ohio that the amphibious operation that culminated in the Battle of the Thames launched.

Schultz explains that the war marked the end of the long struggle by Native Americans to preserve their independence and resulted in the opening of Northwest Ohio for settlement. “The War of 1812 is an exciting, but little known chapter in Ohio history. This program will serve to heighten awareness of the importance of the War of 1812 in the history of our state and will serve as an introduction to the War of 1812 on the Ohio Frontier exhibit currently on display at the Hayes Presidential Center.” Schultz says. Lecture attendees can view the exhibit before or after the lecture. Hours are noon-5 p.m. on Sunday.

Email ThisBlogThis!Share to TwitterShare to FacebookShare to Pinterest
Labels: Bicentennial of the War of 1812, Lou Schultz, War of 1812, War of 1812 on the Ohio Frontier 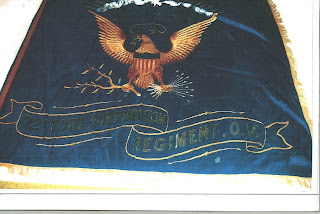 Regimental Colors of the 72nd Ohio Volunteer Infantry
The picture above is of the 72nd Ohio Regimental Colors prior to its recent preservation by the  Sandusky County Historical Society. On May 9th, I had the privilege of attending the unveiling of the now beautifully restored 72nd Ohio Volunteer Infantry regimental colors at the Sandusky County Historical Society in Fremont, Ohio. Sandusky County, Ohio has always been mindful of its history. And now, thanks go to the historical society and its members and the many donors who made the restoration possible!
Years ago, the historical society loaned the 72nd OVI colors to the Rutherford B. Hayes Presidential Center for an exhibit that focused on Sandusky County in the Civil War. Using newspaper articles and diaries and letters at the Rutherford B. Hayes Presidential Center, its unique history was uncovered. Perhaps the short article below is worth republishing to better appreciate it and the sacrifices of the men of the 72nd during the Civil War .
Preserve the Colors or Die
"Remember when the banner is unfurled, that the cords of affection in your regiment reach back to us; and that every heart in Sandusky County will thrill with the fortunes of the 72nd Ohio.  If it be its fate to fall, every household in Sandusky County will shed a tear over its loss."
With those final, dramatic words, Fremont, Ohio, Mayor Homer Everett presented the regimental banner, emblazoned with a "soaring eagle" to General Ralph Buckland who was leaving with some 900 Sandusky County, Ohio soldiers for the Civil War battlefields.
Civil War soldiers had a nearly-sacred regard for the American flag and their regimental banners.  Many sacrificed their lives in battle to protect their colors.  When Confederate forces captured the 72nd Ohio's banner during its first battle at Shiloh, the soldiers of the 72nd were humiliated and Sandusky Countians were shocked.  After apologies and explanations by General Buckland, the women of Sandusky County set to work to make a new banner for the regiment.  Buckland promised it never again would be lost.
It never was.
Even during the desperate retreat from the Battle of Brice's Cross Roads, when Rebels captured two-thirds of the remaining men of the 72nd Ohio, the flag was saved.  Color Bearer Archibald Purcell ripped the flag from its staff, wrapped it around his chest, and concealed it beneath his shirt as he fled from the Confederate cavalry.  Later, Purcell said, "I thought if I were killed, the Rebels would never find the banner hidden beneath my shirt and it would have been buried with me."
Confederate General P.G.T. Beauregard kept the original banner his troops had captured at the Battle of  Shiloh.  He later gave it to his chief of staff General Thomas Jordan, who bequeathed it to his daughter.  Years later, Miss Jordan donated the banner to a fundraising auction in New York.  Ohio Governor Asa Bushnell learned of the flag's existence and asked a friend to bid on the banner for him.
In October 1896, Governor Bushnell presented the banner to Medal of Honor winner Captain Charles McCleary and 72nd Ohio veterans, who had gathered at Clyde, Ohio, for their annual reunion.  After 34 years in the South, the "soaring eagle" of the 72nd came home to Sandusky County. 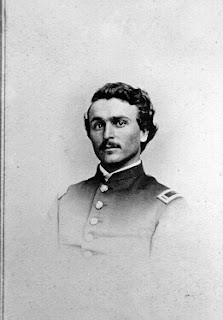 Captain Charles McCleary
Clyde, Ohio
72nd OVI
Awarded the Medal of Honor
Battle of Nashville
Posted by Nan Card at 8:31 AM No comments: