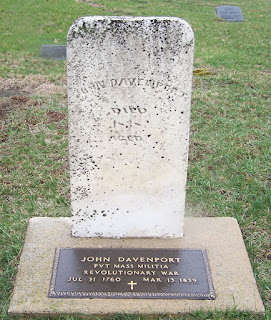 Gravesite of John Davenport, Sr.
Courtesy of Find A Grave

By the time Sandusky County, Ohio was established in 1820, those Revolutionary War soldiers who were still alive were elderly. The few who migrated to the county came with the families of their adult sons and daughters who were hoping to purchase the last of the federal lands for sale in Ohio. Although it lay in the heart of the Black Swamp, the land was cheap at $1.25 per acre. Because there were so few veterans of the Revolution in the county, the Croghan Chapter of the DAR, the Sandusky County Historical Society, residents, and county officials worked hard to honor their service. Well known to everyone were the heroic forbears of the Burkett and Wagner families, who had served as members of General George Washington’s Life Guard.


But there were others. Among them was John Davenport, Sr., identified in a Sandusky County Historical Society yearbook as a Revolutionary War soldier who died in York Township. He moved to York Twp. in 1819, where he purchased 40 acres of the newly surveyed lands.

Davenport was born in Petersham, Massachusetts in 1760. It was there, at the age of 17, that he volunteered for 3 months service with the local militia. Young John Davenport continued to serve for periods each year from 1778 to 1781. When he filed for a pension at age 72, he was nearly blind. Although aged, he vividly recalled how he had guarded British prisoners, served as an officer’s servant, built forts, and responded to Indian attacks as far away as Albany, New York.

He provided a detailed account of a night spent on sentry duty at General George Washington’s headquarters. Davenport served at West Point during the American Revolution’s most infamous act of treason. While in command, Benedict Arnold had ordered the fort’s defenders dispersed, sold supplies on the “black market,” and removed cannons. All in an effort to render West Point defenseless so that the British might more easily capture the site. Private Davenport retrieved one of the cannons displaced by Arnold and helped capture a “mysterious person” associated with the traitor.

Following the war, Davenport returned to Petersham and married Eunice Hawes. Five years later, he took his family and settled in Grand Isle, Vermont and later in St. Lawrence County, New York. At the age of 54 and the father of nine, John Davenport once again enlisted in the militia – no doubt for service in the War of 1812.

For at least two decades, he and several of his adult children lived in Sandusky County, where Davenport was appointed York’s first postmaster. However, the Revolutionary War veteran did not die in Ohio. He sold his land and made one last move with his son, John Jr. This time it was to Winamac, Indiana. And, there, a few months before his 80th birthday, the aged veteran who had fought so bravely for America’s freedom as a young teen, died. His gravesite is fittingly marked with a special plaque testifying to his service with the Massachusetts Militia during the Revolution.