Colonel George Croghan Chapter of the Daughters of the American Revolution 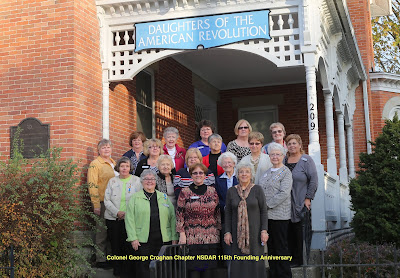 Colonel George Croghan Chapter of the Daughters of the American Revolution
Fremont, Ohio

On November 17th members of the Colonel George Croghan Chapter of the Daughters of the American Revolution of Fremont, Ohio celebrated the 115th anniversary of the organization's founding. Below is a list of the chapter's charter members.

Date of Charter:  February 2, 1901    Organized: November 17, 1900 by
Miss Julia M. Haynes
A member of the National Society, who was appointed Organizing Regent for Fremont by the State Regent, Mrs. John A. Murphy

During its founding year, the following individuals became members, making for a vibrant group of community ladies ready to preserve their country's heritage in Sandusky County, Ohio.
1901 Members
Posted by Nan Card at 6:51 AM No comments: