Elizabeth Rice at Fort Snelling in 1889 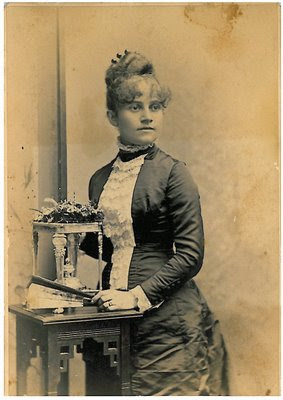 Few wives of career Army officers enjoyed military life during the 19th century. Many found the primitive posts, harsh climate, and rough living conditions so unbearable they returned to live with families in the East. Although born into a life of refinement in Cincinnati, Ohio, Elizabeth Rice, second wife of General Edmund Rice, enjoyed the experience of living at Ft. Leavenworth, Kansas; Ft. Keogh, Montana; and Ft. Snelling, Minnesota. Elizabeth wrote the following letter from St. Paul, Minnesota concerning General William T. Sherman, General Nelson Miles, and their families during a 4th of July visit in 1889.

My dear brother: we have given up going with Genl. Sherman on his trip up the Red River and have decided to stay here until Tuesday when he will leave for Bismarck. They all tell me that it is not the season of the year to make the trip. The General is not coming to Keogh but will go to Bismarck and take a boat down the river. I must try and begin to tell you all we did yesterday. After all we did not go on the train but in a carriage. Genl Miles succeeded in getting a light carriage like ours (?) only with four seats inside. We did not start as early as most of the people so avoided the dust. Genl & lady, Genl Miles brother, and myself. Mr. Miles is a much older man than the General. He is president of the Westminster National Bank of Mass. He lost his only unmarried daughter a short time ago & the General persuaded him to take this trip with him. He is going home by the Yellowstone Park and California. Mrs. Miles says he lost his wife many years ago & was perfectly devoted to this girl of fourteen who has just died. She says he has a lovely home but it is to[o] desolate now that he cannot bear to stay in it.

He has traveled abroad and seems to be a very nice man. I tell his history all I know of it, for your benefit for I know you always like to know all about people. It is a ten mile drive to Minneapolis. We drove over the day & returned the other. I will send you a paper with an account of the performances yesterday if I can find one.

We arrived at the Grand opera (?) before the procession and secured good seats directly in front of the stage. Some of the first people we saw on the stage were our traveling companions the priests. The old gentleman proved to be the archbishop or bishop of Minnesota. He was called upon to speak, but he declined. I suppose because although he speaks beautiful English he is obliged to speak it very slowly. He had a very fine face - very different from the priest. We had very cordial pleasant bows from them. When Genl. Sherman arrived he came to the front of the stage & insisted upon my coming up but when I declined he said save a seat for Rachel. She will come & sit with you & she joined us with Col. Bacon. Genl. Miles occupied a seat on the stage. The Sec. of War quite not (?) ____ by his manner & what he said. I hope they reported his speech his manner was charming & you must hear him to appreciate what I mean. He is so ____ & has such a pleasant manner & good voice. General Sherman made a good speech & was cheered again & again when he came out & when his speech was over. He went to the Hotel for dinner. Of course he saw the fall of St. Anthony & the great mills – one of them makes 3000 bushels of flour in a day.

Ed ought to come here if he wants to make flour. I did not see the Hinkles & they say Mr. H. was probably not well enough to be there. We drove home via the Falls of Minehaha and Ft. Snelling – met Genl S & Miss S. and Col. Bacon at the Falls of Minehaha & we were with them last evening. They have gone out today to spend the day with Genl. Terry at Little Bear's. Will write on the trail - mail at Bismarck 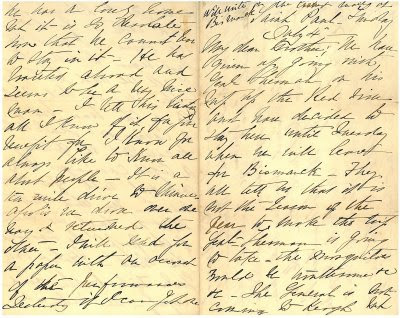 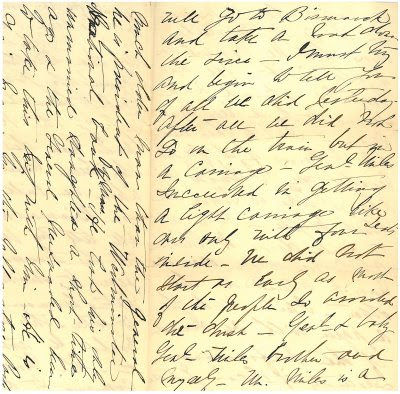