Seeking a Dream in the Far West


2013 marked the Bicentennial of Commodore Oliver Hazard Perry’s victory on Lake Erie that ended British control of the Great Lakes. The naval battle was a pivotal moment in the War of 1812. As the occasion drew near, Put-in-Bay, the site where Perry set sail to meet the British fleet, was jam packed with events to commemorate the historic occasion. Much of the activity took place at Perry’s Victory and International Peace Memorial.


As early as the 1850s, monument associations attempted to establish a memorial to Perry on South Bass Island and nearby Gibraltar, but each time ideas, money, and plans seemed to fizzle. As the 100th anniversary neared, the Inter-State Board of the Perry’s Victory Centennial Commission was formed. With funds from states surrounding the Great Lakes, the commission decided to build a memorial to the long-lasting peace between the U.S., Canada, and Great Britain that followed Perry’s Victory.


After choosing architects Joseph H Freedlander and Joseph D. Seymour’s design in a national competition, the commission broke ground in the fall of 1913. The following 4th of July, the cornerstone was laid. Prominent photographer Otto Herbster was contracted to photograph the monument’s construction.


Put-In-Bay: The Construction of Perry's Monument by Jeff Kissel
Arcadia Publishing
Amazon.com
Nearby, you can see Mr. Herbster’s photo of the monument as the 16th course was reached and another taken in March 1914 of the full construction crew. To see more of Otto Herbster’s great photos of the construction of the monument, see Jeff Kissel’s fine work by Arcadia Publishing. Online, go to HISTORYPIN and click on South Bass Island on the map. There you can see a slideshow of 28 of Mr. Herbster’s monument construction photos. Better yet, when winter ends (!)head for the Bay this summer and enjoy the magnificent view from the top of this great monument - the 4th tallest in the United States.
Posted by Nan Card at 8:44 AM 1 comment:

Photograph of Charles Vincent Dougherty's Cabin in the San Gabriel Mountains
Picture by Lonnie DeCloedt and used with his permission
Deathbed confessions were fairly common during the 19th century. When all hope was gone, family members, a trusted friend, minister, or physician frequently listened to the final words of the dying. But rarely have mourners ever heard a confession like that of Charles Tom Vincent, who passed away in a Los Angeles hospital in 1926.
Vincent called his doctor in and asked that he be buried in the Sawtelle National Cemetery. He knew that for that to happen, he would have to reveal his true identity so that his Civil War service could be documented. He confessed that his name was really Charles Vincent Doughtery. He had been born in 1838 and grew up in Fremont, Ohio. 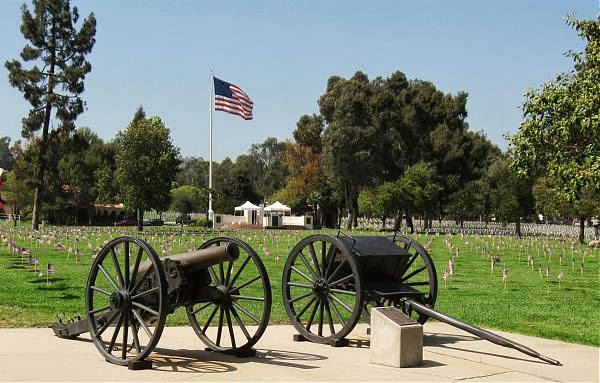 Sawtelle National Cemetery
His family was deeply religious and highly respected. His sisters had married prominent members of the community. His mother, Josephine, was considered a "very sincere Christian" by fellow worshippers at St. Paul's Episcopal Church in Fremont.
True patriots, Vincent and his older brother James enlisted to fight for the Union cause. They were among the first to answer Lincoln's call. They served together in the 8th Ohio Volunteer Infantry. Both were wounded during the conflict - James at Gettysburg and Vincent at Chancellorsville. When their time was out, James returned to Sandusky County, but not Vincent. He headed for Arizona.
There, he and a friend prospected for gold. One day after working their claim, they discovered three thieves ransacking their cabin. Vincent confessed that he and his partner shot the three and immediately buried them on the spot - a secret he had kept for nearly 40 years.
Realizing that from now on, they would be wanted men, Vincent and his partner abandoned their Arizona claim and took off for Los Angeles. It wasn't long before the lure of gold drove Vincent into the Sierra Nevadas. He later made his way south to the San Gabriel Mountains, where he built a cabin, prospected, and lived off the big game he so skillfully brought down.
While hunting big horn sheep not far from his cabin, Vincent discovered what he thought was the "mother lode." He and two partners dug a series of tunnels, bringing out some gold, but they lacked the capital to fully develop their Big Horn Mine.  In1902, they sold the mine to the Lowell and California Mining Company. According to Lonnie DeCloedt, who has researched Vincent's life, the Big Horn became the largest mine in Los Angeles County. But yields remained low and the company eventually closed the Big Horn.
As age crept up on Vincent, it was no longer possible for him to continue living alone in his secluded cabin in the mountains. By 1910, the old miner had moved to a Los Angeles boarding house and later to the home of a supposed nephew.
Was Vincent's final request carried out? It certainly was. A tombstone marks his grave at the Sawtelle National Cemetery. It reads "Vincent Dougherty, Co. F, 8 Ohio Inf." Thanks to residents interested in the area's local history, Dougherty's cabin in the San Gabriel Mountains still survives. You can read more online about Charles Vincent Doughtery and the Big Horn Mine at Lonnie DeCloedt's  "Weekly Pioneer" site.  Lonnie graciously granted permission for the use of several photos that appear on his site. 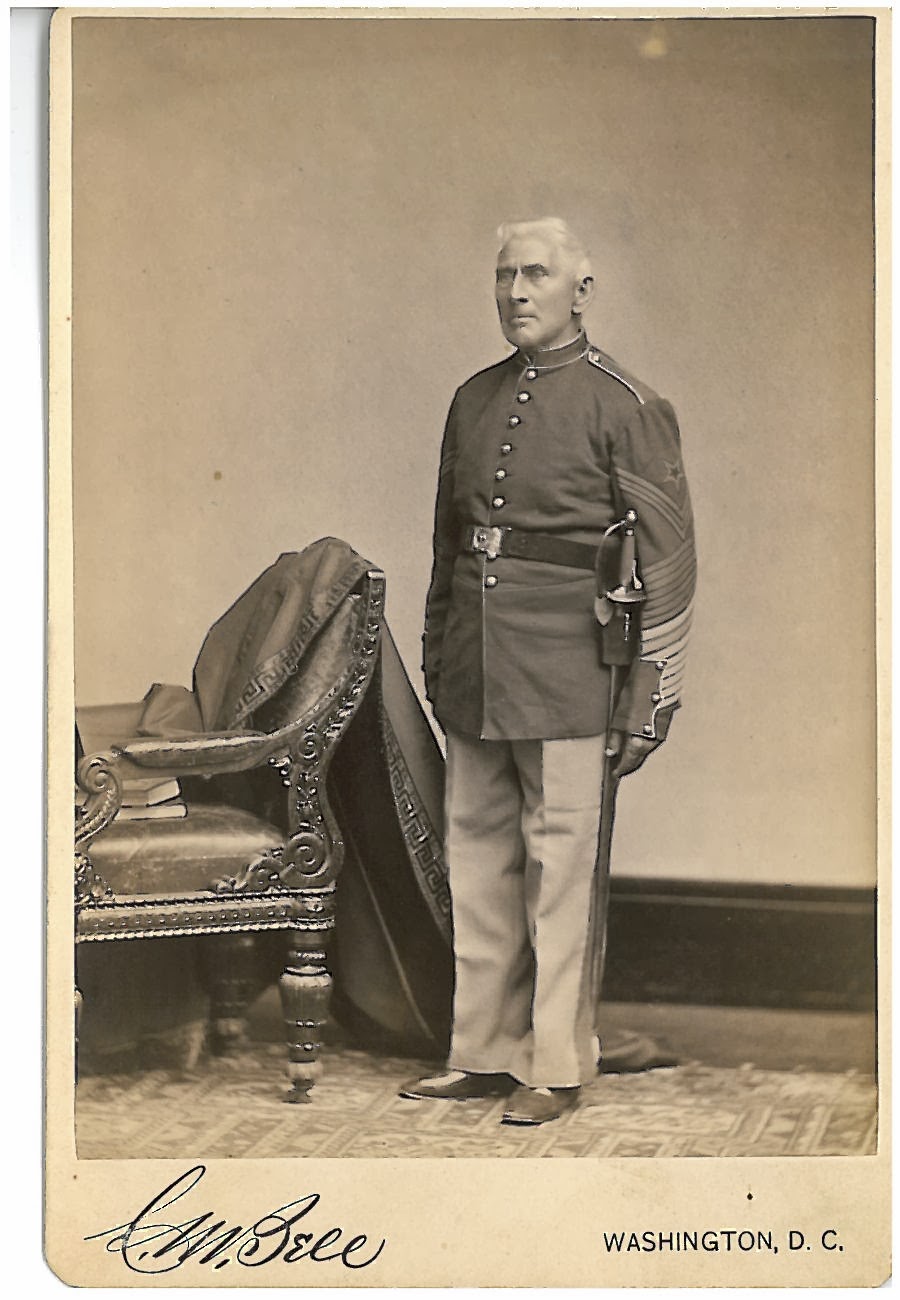 
In 1813, there were no cameras, videos, or smartphones to record the historic events of the Battle of Fort Stephenson – only the words of those who lived it 200 years ago. One of those was 13-year-old Drummer Boy William Gaines, who had marched north from Kentucky a year earlier with the 24th U.S. Infantry, caring for his uncle’s horse. The two had volunteered with General William Henry Harrison’s Army to defeat the Native Americans at the Battle of Tippecanoe. It was there that Gaines’ uncle was killed. Undeterred, Gaines re-enlisted in the 24th the following July and again marched north – this time to Fort Meigs. There he helped defend the Ohio Frontier from the British and their Native American allies.

Decades later, Col. Webb C. Hayes interviewed Gaines about his experiences serving with Harrison’s Army during the War of 1812. Although an elderly veteran, Gaines remembered the events of the Battle of Fort Stephenson with great clarity. He recalled that while camped at Fort Seneca, rumors spread that the British attack on Fort Stephenson was imminent. As Gaines told it, he then “exchanged his drum for a musket” and was one of six from the 24th U.S. Infantry dispatched to Fort Stephenson along with troops from other companies.

Shortly after arriving at the fort, the “British hove in sight and began landing their troops and cannon.” Colonel William Shortt demanded surrender of the fort or no quarter would be given. When 21-year-old Major George Croghan refused and shut the gates, he spoke to his men, telling them to “prepare themselves as no quarter was to be given.” 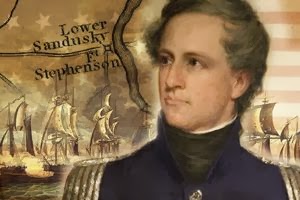 The bombardment began. Lt. Joseph Anthony, Gaines’ commanding officer, panicked and quickly hid until after the battle. Ordered by Croghan to hold their fire, the defenders waited anxiously as they endured the British shot and shell. Gaines’ comrade, Samuel Thurman, climbed atop the blockhouse, “determined to shoot a redcoat.” Shortly, a British cannonball “took his head off.” Toward evening, the British charged and Croghan, at last, gave the order to commence firing! They “shot through loop holes in the pickets and port holes in the blockhouses.” Gaines vividly recalled the wounded Colonel Shortt of the 41st Foot, “holding up a white handkerchief for quarter.”

With Thurman dead and Anthony under arrest, the young teen returned to Fort Seneca with his remaining 24th comrades. After Perry’s Victory on Lake Erie, Gaines marched to the lake and boarded one of Perry’s ships. They were now on the offense and bound for Canada. When they landed, Harrison found that the British had already evacuated. Colonel Richard M. Johnson’s mounted forces followed the enemy at a rapid pace. One thing and one thing only was on their minds - revenge for the River Raisin slaughter of their fellow Kentuckians. Perry and his men aided the Kentucky volunteers and Harrison’s regulars. His ships carried their baggage and military supplies to the mouth of the River Thames.


Gaines declared, “We made short work of the British. They knew we were coming and General Proctor and an aide fled before we were within a mile of them. They were the only two to escape capture.” Native American resistance faded away after the loss of Tecumseh.


Ordered by the Secretary of War, Gaines and the rest of Harrison’s troops, once more boarded Perry’s ships. They set sail for Buffalo and then Sackett’s Harbor. Gaines had the good fortune to sail with Harrison, Perry, and the captured British officers. One can only imagine the victory celebration that took place aboard that ship. From Tippecanoe to the Thames, William Gaines, just 13 years old, had been there – a participant in the victories that brought pride and unity to a young nation.


On Aug. 2, 1879, President Rutherford B.Hayes and his son Webb visited the Soldiers’ Home in Washington, D.C., to interview William Gaines. Gaines was 80 years old and was the last living veteran of the Battle of Fort Stephenson. The entire interview was published in the August 22, 1879 issue of the "Fremont Journal."  Gaines continued to serve in the U.S. Army for most of his adult life. The photograph of Gaines is part of the Colonel Webb C. Hayes Collection. It was taken in 1879 at the Bell Studio in Washington D. C., located not far from the White House.


The Hayes Center’s Manuscripts Division recently launched its Northwest Ohio Veterans Oral History Project. Its purpose is to collect, preserve, and make accessible the personal remembrances and recollections of America’s veterans through personal narratives, correspondence, and visual materials. The project focuses on veterans who served from before World War II to the present day conflicts of Afghanistan and Iraq.


Julie has begun interviewing veterans in their homes and at various locations. She makes an audio recording of the interview, which, along with scans of photographs, military documents, letters, and diaries, are preserved as part of the Hayes Presidential Center’s Local History Collection. Julie has also uploaded the audio recordings and scans of veterans’ photographs and documents to Youtube and Historypin where anyone can access them and listen to the audio recording. They are also linked on the Hayes Center’s website.


Our local history is an invaluable resource for our community. It offers an open doorway to our past and to the extraordinary individuals who have helped create our community’s story. Although no tribute can truly match the magnitude of our veterans’ service and sacrifice for our nation, we can preserve their remembrances and learn from their experiences.


Julie prepares a packet containing a typed transcription of the interview and a CD of the digital files for each veteran. All of the originals are returned. However, the Hayes Presidential Center would be pleased to accept veterans’ donations of their original letters, photographs, diaries, and documents. Through the years, numerous veterans have donated their collections to the Hayes Center. They are part of the permanent holdings in the Local History Collection.


If you or anyone you know are or were a military veteran and would like to participate in the Hayes Center’s project, please contact Julie Mayle or Curator of Manuscripts Nan Card at 419-332-2081 or email jmayle@rbhayes.org or ncard@rbhayes.org.
Posted by Nan Card at 3:02 PM No comments: