On July 18, 1918, the Second Battle of the Marne marked the turning of the tide in WWI. It began with the last German offensive of the conflict and was quickly followed by the first allied offensive victory of 1918. It took place in a triangular area bounded by Chateau-Thierry. Soissons and Riems. The American Expeditionary Forces with more than 250,000 men fighting under overall French command played key roles in the initial defense and the later advances. More than 30,000 were killed and wounded. The United States began suffering casualties on an enormous scale that was indicative of the losses that marked the Great War.

One who took part in the Marne was Glenn Burkett of Fremont, Ohio.  Burkett worked as a night dispatcher for the Lake Shore Electric Railway. In December 1917, Burkett enlisted in the United States Army. He was assigned to the First Trench Mortar Battalion (First Army Corps) and trained at Fort Crockett, Texas. Burkett was shipped overseas on the H. M. T. Kursk as part of Battery "D." He received training in grenade throwing, bayonet practice, and trench mortar drill at Fort de la Bonnelle.

Two months later, Battery "D" took part in the reduction of the salient at St. Mihiel and then marched to the Argonne. He also served as an ammunition carrier for machine gunners of the 305th and 306th Infantries of the 77th Division. The battery also saw action at the Battle of the Meuse. On the 10th of November, Burkett’s battery received news of the armistice. On January 29, 1919, Burkett left France aboard the U.S.S. Virginia to return to America, arriving at Newport News two and one-half weeks later. Corporal Burkett was discharged from Camp Sherman, Chillicothe, Ohio, on March 13, 1919.

Burkett wrote the following in his diary, which is part of his two-volume record of his WWI service in the Hayes Library’s Manuscripts Division. Names of French locations are spelled just as Corporal Burkett wrote them in his diary. To learn more about his service in WWI, follow the link to a description of his collection that is part of the Local History collection. Burkett included pictures and biographical sketches of those who served with him; daily diary entries; overall explanation of the battles in which he particpated; and photographs of French locations.

I suppose there are many other things to be proud of, but being where we were on July 19th and the following days is just about the best thing that ever happened to us. The fun all started here and stayed with us for four months or more. Like all the Army we had our regular crabs and growls, but it’s got Vitry beat ten ways going and coming. Three enemy machine guns were taken over here, and although nobody knew beans about ‘em, we fired them at every boche plane that we even heard, much to the Majors and Captains disgust. A la the Major we remember “Ger-ry-mon-ey”, What is that? “Whizz-bang, Sir? and the fun that followed. But Lt. Dennis was in for blazing away, and blaze away the machine guns did.

When the order was issued to dig-in, the sand was gently brushed to one side, making a hole about an inch in depth. Fine Dug-out. If it were up to the Americans to have dug-outs, there wouldn’t be such a thing. Digging dug-outs is all a waste of time, to the American notion, but when they are already dug, well that’s a different thing.

The 26th.Division, the 32nd, the 42nd, and a few other stray outfits were mixed up in the counter attack around that neck of the woods, all of them being parts of the First Army Corps, the largest unit of the American Army then organized. Near our last location on that front, was a Big Bertha enplacement, close to the Coincy Aviation field, just outside of Fere-en-Tardenois. Along the roads from that town to Soissons and the Chateau-Thierry, in the heat and dust of summer roads, came the non-forgetable picture of emmence traffic that is caused when an Army Advances. Traffic had all been going south, you might say, for months, and the sudden change was like letting loose a long restrained dam of trucks. Wagons, people and soldiers, for that is the way the American Army went after the astounded Dutchmen when the tide turned. That time in the summer, how long ago it seems.
Looking back now, it seems like a paradise, compared to sitting around a cold barracks in the winter, Waiting. August 12th 1918 we with-drew to the hang-out at Germigny, for a few days recuperation, then, on the 18th day of August we hiked it to the La-Ferte-Sous-Jouarre then headquarters for the First Army Corps, and entrained Monday August 19th 1918, for other ports.

Thru Reims, Chalons and Epernay, all night travel we arrived at Wassy, detrained and marched to the quiet unsuspecting little dried up village of Arranacourt, all on the day of August 20th. 1918. In six days rest at this peaceful little place, we found the only startling thing was to much blackberry short cake. This haven for bums was deserted August 27th. And on the hob-nailed specials came into their own in three days one-two-three-four thru Joinville, Houdelaincourt and Vancouleurs, to Pagny-sur-Meuse, stubble and freshly plowed fields being the bed for aching feet and bodies at night. Pagny-sur-Meuse proved to be another pup-tented area, on the banks of the Meuse. The moving tractors at night, and propaganda from enemy planes by day were the chief amusement here. August 31st. we packed the roll once more, marched thru Teul in the hour that made September Morn famous, and arrived at the Jallion woods on dawning Sunday morning, General Ligget inspected the picket line and bits of equipment. Two days here and the Army was again on the move, this time under fire, into the Foret de Peuvenelle the original home of rain as it appears when looking at the ocean. The square heads bombed us every time they smoked a cigarette, and the balloon outfit down the road had the windlass hot all the time. September 7th. 1918 the Battery footed it out of that place for Montauville (Thru Pont-a-Musson) and into the positions in the Bois le Pretre, on the extreme right of the Saint Mihiel salient , for eight nights and days without rest, only grabbing an occasional hunk of beef, bread and cup of java, the men beavered away on the positions where we were to first use the “Helluve gun to get the Hun”

This particular spot was known as Dead Mans Hill, for the French had lost so many lives holding it as the final point of resistance against the enemy in 1916. Across the ravine (for that is all it is) were the German trenches in full view of our peering eyes, and the machine-gunners who were waiting for our peering eyes to pop out far enough to warrant a shot. The path from “P.C” to No.3, enplacement was a walk that openly envited a shot, and if Heinie wasn’t asleep he didn’t pass you by without a greeting. The kitchen here was right out in the open, so were all the emplacements, and also the ammunition pile and the emplacements used were old ones of the French which would have been fine dope for Fritzies intelligence department had he known it.

Hayes Presidential Library and Museums Celebrates Its Centennial, May 28 - 30 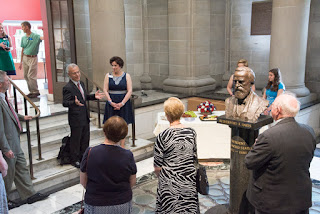