A woman once called a "Jack of all trades and master of none" by her mother, Alys McKey-Bryant wound up trailblazing her way into the history books thanks to her passion for aviation and her reckless abandon for the gender norms of her time. Her response to her mother, "Well perhaps it is good... to be able to do several things, for then one is never out of a job." It was a testament to the life she lived and the legacy she left behind.

In 1912, Bryant was living in California and spending her time rebuilding a Curtiss-type pusher aircraft and teaching herself to fly. By the summer of the following year, she made history as the first female to fly in Canada when she took off at Minoru Park, Vancouver, on July 31, 1913. That year, she also barnstormed in Washington, Oregon, and Idaho.

John Milton Bryant came into Alys' life early in her flying career. It was he who signed Alys as a barnstormer pilot. But within ten short weeks of their marriage, Alys became a widow. Days after Alys' historic Canadian flight, John lost his life while flying an exhibition at Victoria on August 6, 1913.

Within three years of rebuilding her plane and learning to fly, Alys McKey-Bryant found work as an aircraft mechanic in 1915. This is also the year she met Tom Benoist, who would soon become both her employer and close friend. Benoist had opened The Benoist Airplane Company in Sandusky, Ohio. Alys became Benoist's factory supervisor, mechanic, and flight instructor. Two of her responsibilities were building aircraft and training students for military service as airmen. Their friendship was short-lived, however, as Benoist lost his life in a freak accident as he stepped off the local street car in June of 1917.  After his death, classes were suspended and the factory shut down, leaving Bryant to sort through all of the drawings, patent records, and office files for the now defunct company.
Bryant penned an unpublished manuscript, Born With Wings, which provided insight into her personal life, as well as her time at what had come to be affectionately referred to as "the Benoistery." The stories she shared about her work, the students, and their leader painted a picture of a man who was idolized by those fortunate enough to learn from him and who left a hole the size of a crater in his wake.

She also spoke of a plane she spent time designing and building during the winters when Lake Erie was frozen and flying was not possible. Although this "pursuit style" aircraft made it as far as partial fabrication. it was ultimately never finished. 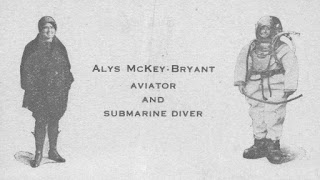 Charles E. Frohman Collection
Staying true to her "jack of all trades" philosophy, she had interests in fields involving land, air, and sea. A business card advertises her services as both an aviator and a deep sea diver, but her love for the air ran the deepest, and it also garnered the majority of her recognition.

During the celebration of the twenty-fifth anniversary of her historic flight in Canada, Bryant stated that, "Although WINGS have given me everything--and have taken from me-- everything but my own life--my love for them has never diminished and now my one thought--one prayer-- is that WINGS may be used--NOT for destruction, but for making more friendly and understanding relations between the nations of the earth."

Teddy and Taft Campaigning in Ohio