A Look Back to Memorial Day Sandusky County, 1987 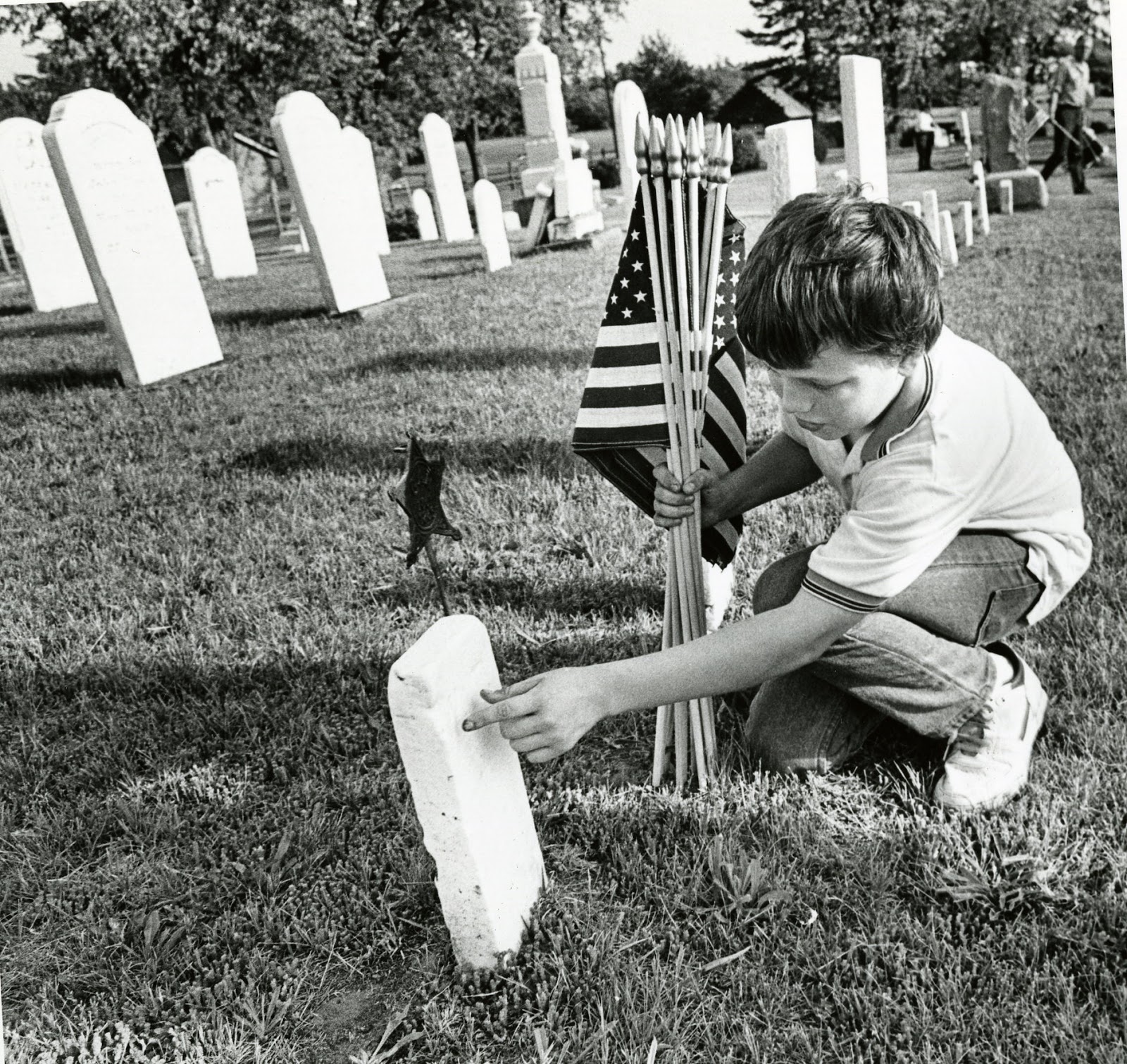 Memorial Day
Sandusky County Ohio
1987
This Memorial Day, we once again remember and honor those who have sacrificed so that we might continue to enjoy America's freedoms. A look back  shows Boy Scouts Randy Witte (top) and Ben Everett (below) with Tom Klyne (reading names) and Charlie Nopper placing the American flag on each veteran's grave at the West Union Cemetery in Gibsonburg, Ohio, May 26, 1987.  These photographs are part of the Fremont News Messenger photographs donated to the Hayes Presidential Center.

Dr. Thomas Langlois was an Ohio State University professor who served as director of the Stone Laboratory on Lake Erie’s Gibraltar Island for more than two decades. Much of his research, photographs, and published works are today located at the Hayes Presidential Center. A quick glance at the collection reveals that the late Dr. Langlois had many interests far beyond his research of Lake Erie. One of them was octagonal structures. During the1940s, he took pictures of many of these unusual buildings throughout his travels in the U.S. and Canada.
It was President Thomas Jefferson who first designed the octagonal house, but it was Orson Squire Fowler who popularized it some 30 years later. Fowler was better known for his phrenology research, the “science” of reading a person’s character by studying the bumps on an individual’s head. Today, phrenology seems strange beyond belief, but Fowler lectured, wrote, and published extensively on the subject from his New York offices.

He became interested in architecture when he decided to design his own home. It wasn’t long before he grew fascinated with the octagon, claiming it was superior to other forms of architecture in lighting, heating, and ventilation. He soon published plans for octagonal cottages and homes that used scrap lumber and gravel for walls. Fowler believed the octagonal home was more in accord with nature, economical, and healthier to live and work in than other buildings.

In 1958, the “Columbus Dispatch Magazine” featured an article with 17 Ohio octagonal structures that Dr. Langlois had photographed and researched. It wasn’t long before readers wrote the magazine to tell about other octagons. Within weeks, six more structures were documented. Today, some 53 Ohio octagonals have been identified. While some have been  demolished, others have deteriorated. Many have been lovingly preserved. There were barns, schools, and courthouses. Of Ohio’s 88 counties, Ashtabula features the most. Many of its early residents were from New York, the state where more octagons exist than any other.

Researchers across the U. S. have worked to create a website (www.octagon.bobandanna.com). Organized by state, they have included articles, drawings, and photographs of octagonals as well as round and hexagon structures. No doubt many Ohioans will recognize or recall some of the octagons that appear on the site.
I was pleased to make some of Dr. Langlois’ photos available for the Ohio portion of the site. One is featured above. It is his 1946 black and white print of a 20th century octagon built by William Jacobs on E. Norwich in Columbus. Jacobs called his octagon an “experiment” in ventilation without using windows. Others called it “Jacobs Folly.” It featured an early form of air conditioning and a roof and floor made of concrete with a tunnel underneath. After spending nearly $40,000, the walls still “sweat” continuously and heating costs were exorbitant. Jacobs finally sold it in 1937 for $4500. The new owner added a second story and divided it into apartments. Finally, in the late 60s, it was
demolished.

Below are several more of Dr. Langlois' photographs of octagonal structures. 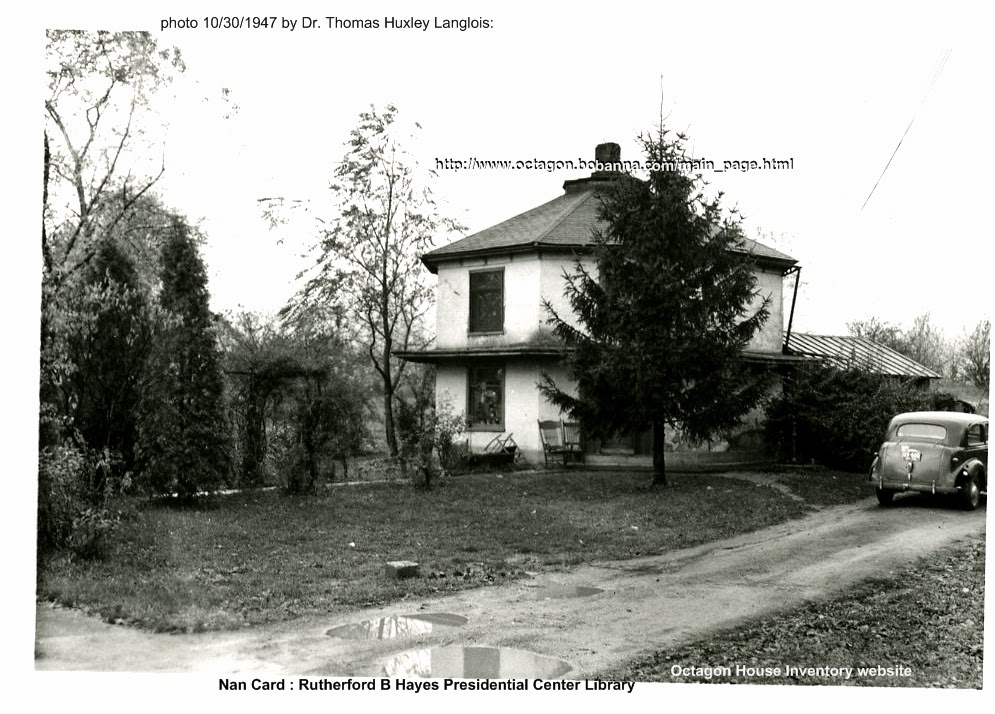 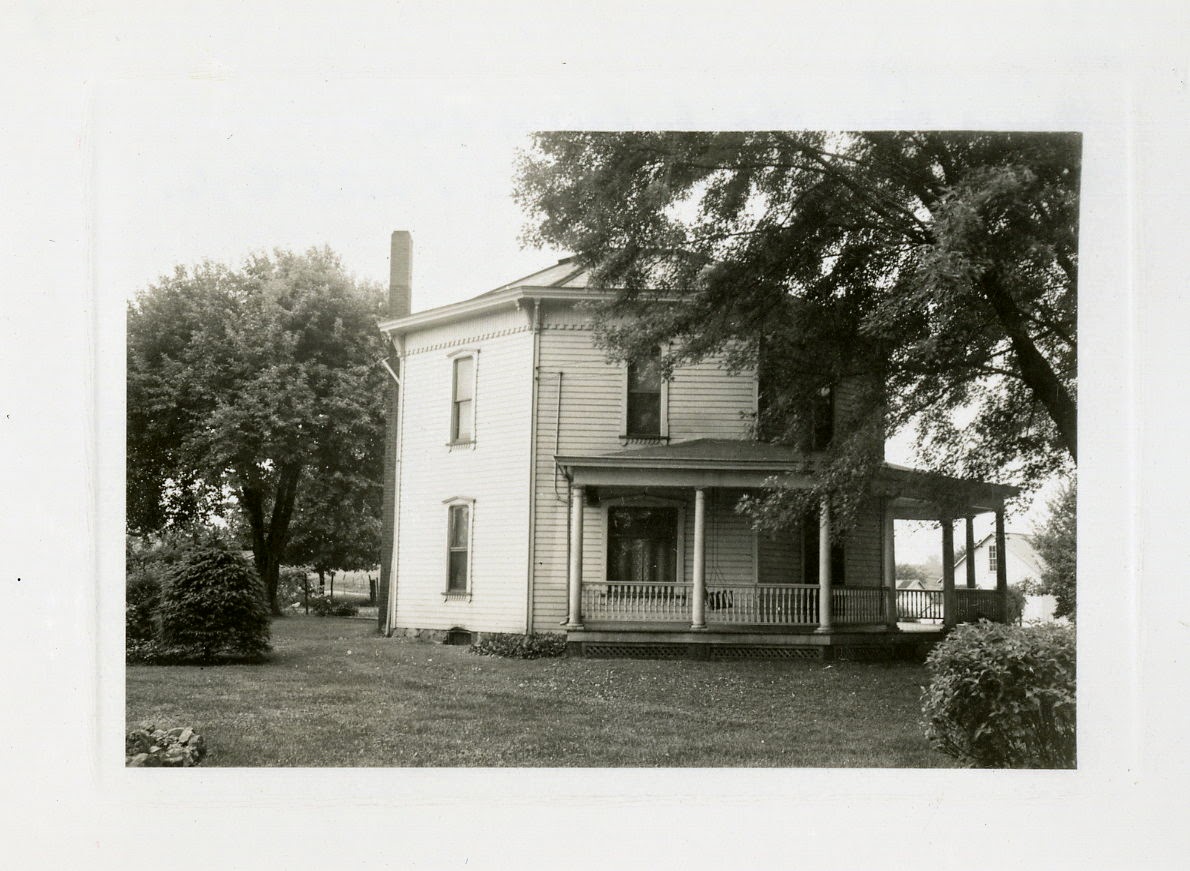 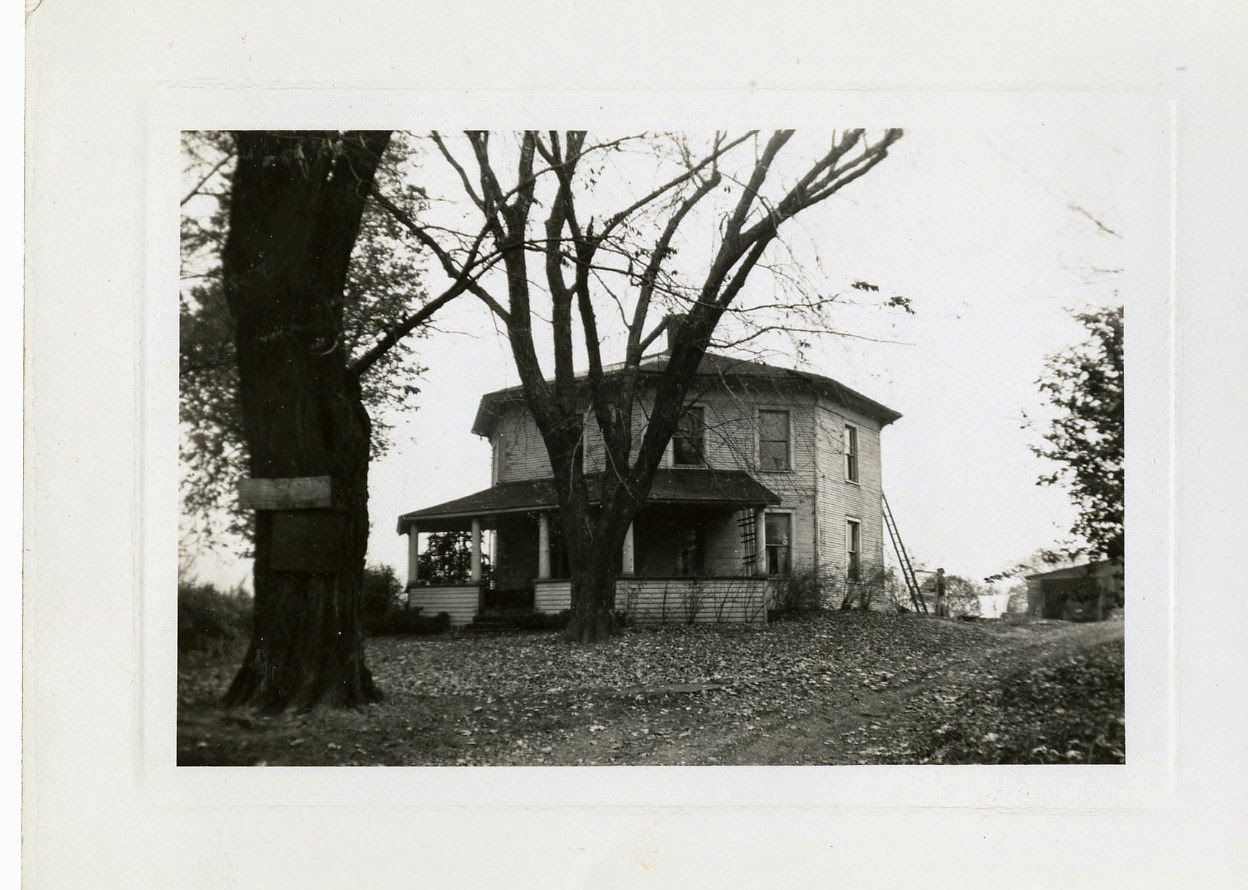 When Jacob Kuebeler passed away in the spring of 1904 at his home in Sandusky, Ohio, the local paper heralded the millionaire as its wealthiest citizen. Indeed, he was! Jacob Kuebeler had gained his wealth through years of hard work. One of sixteen children, Kuebeler was born in Herigen Hessen, Nassau, Germany in 1838. At the age of 22, left his homeland, arriving in Sandusky just before the Civil War. The following year, he married Christina Zimmerman. They were the parents of two daughters.

For the next four years he toiled in a Sandusky brewery. After spending a short time in Akron at the Oberholz Brewery, Jacob returned to Sandusky. With his brother August, he founded a small brewery in Sandusky. It was known as Jacob Kuebeler and Company. Only 20 barrels could be produced each day, but Kuebeler’s product was an immediate favorite. Kuebeler had only a single horse and wagon to make deliveries.


The business grew and in 1893, stock was issued under the name Kuebeler Brewing and Malting Company. Three years later, Jacob Kuebeler’s brewery merged with the Stang Brewery with Jacob Kuebeler as its president. The Kuebeler brewery was one of the largest businesses in the city and later became part of the Cleveland and Sandusky Brewing Company. 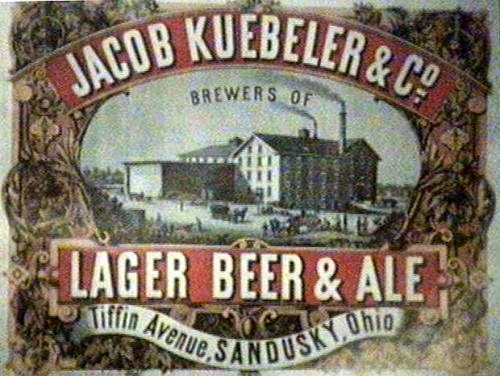 Kuebeler also invested in local enterprises. Among them were the Cedar Point Pleasure Resort Company, Diamond Wine Company, Oak Harbor National Bank, Gilchrist Transportation, and others. Kuebeler’s brewery and businesses were responsible for much of the local employment.

According to the Sandusky Register, more than 3,000 people paid their respects at the Kuebeler home. The funeral cortege was a half mile long. It seemed only fitting that this great brewer and businessman should have a monument worthy of his accomplishments. To that end, Joseph Carabelli, the successful Italian sculptor and stone cutter of Cleveland was commissioned to create an appropriate marker for Jacob Kuebeler’s gravesite at Sandusky’s Oakland Cemetery. Sandusky’s cemetery was typical of the park-like cemeteries of the Victorian era that flourished after the Civil War and spread rapidly throughout Ohio

Carabelli, designed monuments for all of Cleveland’s most prestigious families, including that of John D. Rockefeller. For Kuebeler, Carabelli created a magnificent obelisk that weighed 80 tons and was 48 feet high, twice the height of any monument in Sandusky’s Oakland Cemetery.

Above is a rare image produced from a glass plate negative in the Charles E. Frohman Collection. Taken in September 1907, the picture features Joseph Carabelli himself. He and his workmen were about to hoist the Kuebeler obelisk atop the sections that make up the base of the monument. Carabelli, wearing a vest, is pictured standing near the obelisk. Today, Carabelli’s work on the Kuebeler lot still remains the tallest monument in Oakland Cemetery.Below is a photo taken by local commercial photographer Ernst Niebergall.

National Museum of the Great Lakes: A Must See! 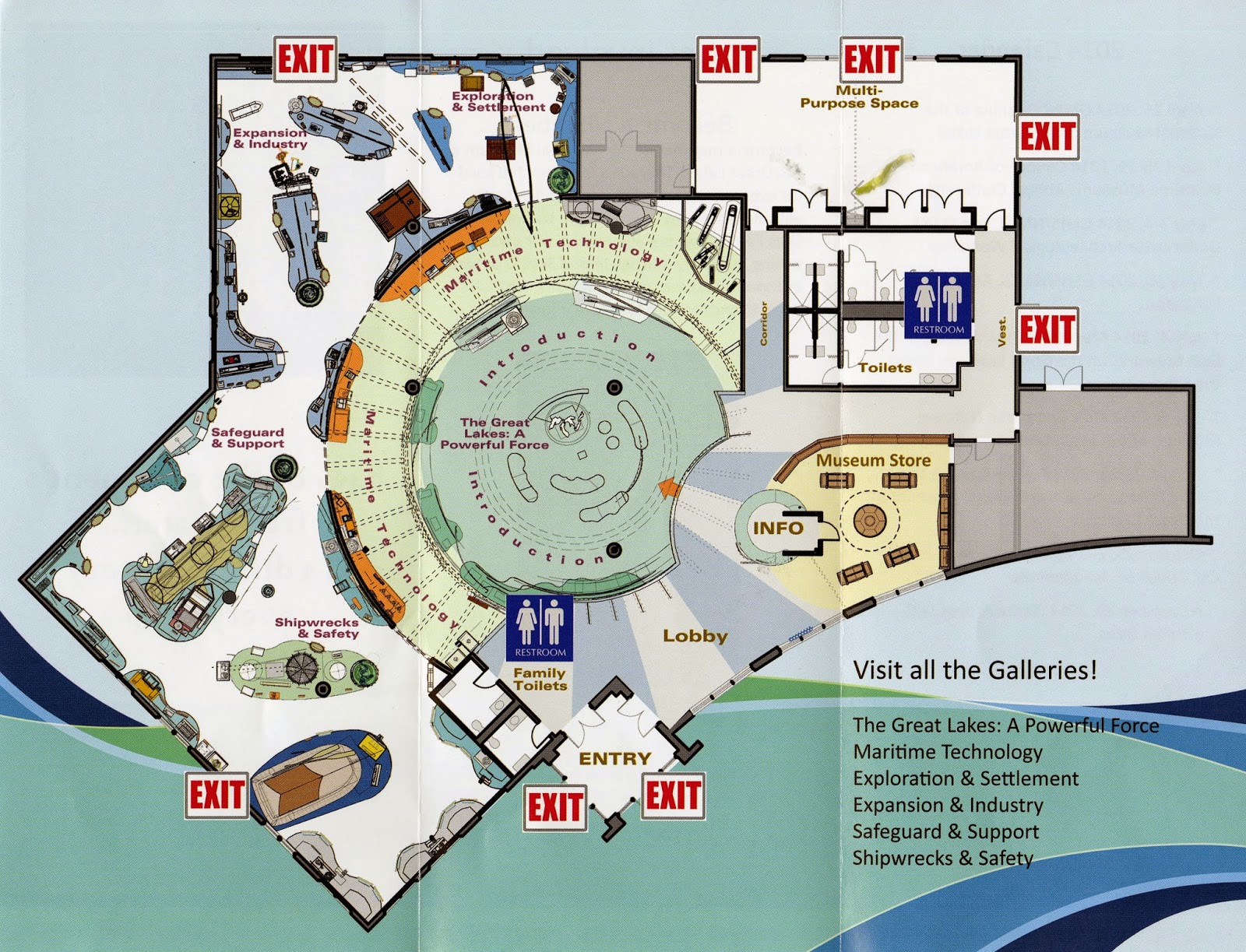 Last November, my blog post featured a fundraiser to support the National Museum of the Great Lakes located at 1701 Front St. (right off 280) on the Maumee River. Well, in late April, it became a reality.
This past week, Hayes Center Communications and Marketing Director Nancy Kleinhenz and I had an opportunity to visit. It's a must see! The Great Lakes Historical Society can certainly be proud of its accomplishment. Both educational and entertaining, the museum emphasizes the important role the Great Lakes has played throughout our nation's history to the present day.  Designed by Hilferty of Athens, Ohio, its  48 interactive exhibits make use of photographs, artifacts, ships' logs, and documents of the Great Lakes Historical Society.  The videos, photos, and artifacts that make up the displays capture the interest of visitors of all ages.(I wanted to spend more time writing messages in Morse Code!). 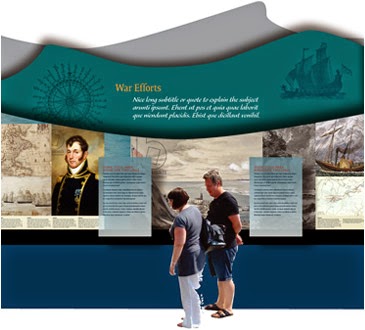 The museum ship S. S. Col. James M. Schoonmaker, once the largest freighter on the Great Lakes, was recently docked just behind the museum. It's impressive!

Northwest Ohio Veterans Oral History Project
Hayes Presidential Center
On this Memorial Day...
"As citizens we must listen to our veterans. If we do, we will hear stories of pride and courage, anger and pain, laughter and joy. We'll hear of actions that humble and inspire us. We'll also hear of moments that break our hearts. These stories represent the best of our nation." 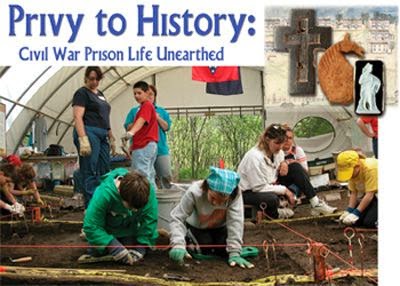 The Hayes Presidential Center’s latest exhibit - Privy to History: Civil War Prison Life Unearthed – opens May 1, 2014 for a seven-month run. Visitors are presented with new information about the Johnson's Island Civil War Prison, near Marblehead, gleaned during archaeological exploration of the prison site. 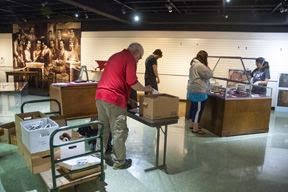 Privy to History: Civil War Prison Life Unearthed advances the history of Johnson’s Island with facts uncovered since the 1965 publication of “Rebels on Lake Erie” - the seminal history of the prison written by Charles E. Frohman. Collaboration with David R. Bush, Ph.D. of Heidelberg University’s Center for Historic & Military Archaeology, makes possible the display of numerous artifacts recovered from the site during excavations of the prison latrines. A visual timeline chronicles the prison’s creation, arrival and treatment of prisoners, and diversions POWs employed during their imprisonment - including jewelry making, theatrical productions, and photography.


An episode of the History Channel’s History Detectives is included in the exhibit. It explores the amazing story of a particular Confederate officer who fashioned a camera from a tobacco box and used oyster tins to produce photographs of his fellow prisoners.