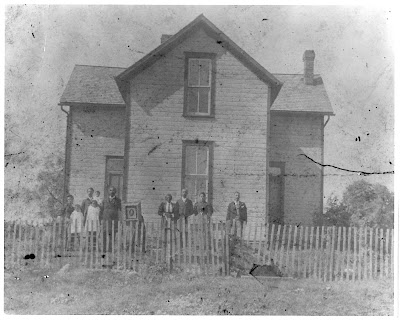 The letters below were written to the American Colonization Society by Dr. John W. Jones, ancestor of  Charles Weiker, who provided the photograph of Dr. Jones' home in Shelby County.  According to Dr. Jones' letters, written in the early 1850s, he wanted to learn more about the organization and Liberia through its publication "The African Repository."

He states that he moved from Tennessee to Cincinnati, Ohio in 1834. He moved to Mercer County and then to Shelby County around 1838. He correctly believed that "the two races could not dell [sp] together much longer, apon [sp] one soil." Only eight years later the United States would be at war.


The American Colonization Society existed until after the Civil War. The organization worked with the United States government to transport approximately 12,000 African Americans to Liberia.


Dear Sir. I will now give you some information, abought my self and family. I am a colered man with one fourth of African blood, and my wife is about the same. I move from the state of Tenessee, in the year 1824 to the city of Cincinnati and live there ten years and move one hundred miles north in mercer county fuour years, sence then I move to Shelby county wher I now reside at present. We have six children four sons and two daughters my childen lives most of them in Cincinnati and are apose to going to Liberia and I am sorry for it. I have ben in the notion of going to Liberia for a few years past but, I have ben in debt So I could not go. If I could sell my little farm and pay my debts, my children wil come and see me this sommer if they can, and we will try to come on soam understanding, abought it. Please send me, the pamphlet containing abought going to Liberia and a few of the Liberia newspapers if you can. If I can sell my land and git some of my children to go with with me I want to go some time next year or the year, after. If the Lord is willen. Please to answer this letter, as soon as you can. I am a doing a great deale of good and have done, with the pamphlets.


Dear Sir I have ben taking some notice of the American Colonization Society ever sence its formation, and think it riseing and importence, and one of the greatest blessings for the colored people in the united states of America, if they did, but think so but the most of them have and are blinded to their best intrust to the present day. By listing to a socitey of people, that is not their true frinds, but is dying away very fast. Our people is very ignert abougt Liberia and the goodness of the county, So I make a great allowance for them. For a very few of them can read or take news papers or the repository, to inform them selves. Very few of them are aware that the government is a making, any priperation to send them to Liberia, for they are astonuous, to hear that the different states are pasing sick streous laws as to prohibit them from going into any of the free states and settle. I do believe that the two races of people cannot dell to geather much longer, apon one soil, a greable to the bible. For the gospel must be prached to all, the nations of the earth be four the end of time. And who is better calculated to bear the glad tidings of the gosple to Africa then the colered people of the united states of America, with their own concent. All they want I think is information on the subject and let each state tell them planly to make a priperation for moving some where, out of this country.
Posted by Nan Card at 11:30 AM No comments: 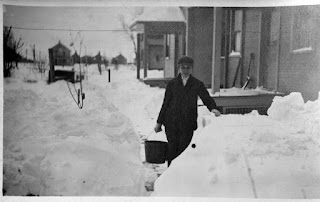 These photos were taken in Fremont, Ohio during the winter of 1912. Handling heavy snowfalls was much more difficult for residents who lacked the heavy equipment we have today. Below is what must have been one of the earliest snowmobiles! Sadly, we don't know the name of the creative individual who invented this early machine. Note that it even featured a lantern for lighting the way after dark! 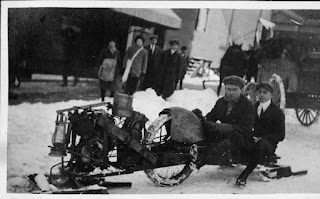 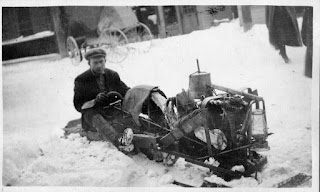