The following is a guest post from HistoricNaturalDisasters.com, a fascinating new web project that compares historic photos of natural disasters with Google Earth images of those same areas today. 2013 marks the centennial anniversary of the floods that sent Ohio's rivers overflowing and levees and dams bursting throughout the state. Check out Jeff and Robert's article about David Chambers and 1913 Dayton, Ohio Flood.


David Chambers and the Great Dayton Flood
by
Jeff Satterly and Robert Muhlhauser
The week of March 21st through March 26th marks the 100 year anniversary of one of the greatest natural disasters to ever hit the United States. A series of storms caused flooding and even tornadoes that ravaged the Midwest and parts of New England during this week in 1913 and left hundreds dead and thousands homeless, and caused billions of dollars in damage. While there were undoubtedly many powerful and heartbreaking stories following the Great Dayton Flood of 1913, one particularly powerful one comes from the Chambers family. David Chambers heroic story told by two of his grandchildren was documented by 1913flood.com. The women tell the story of the 24 year old father of three and his brave efforts that saved many. 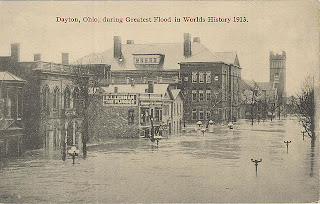 View of B.L . Lehman and Besko restaurant
on 134 West Fourth Street Dayton, Ohio 1913
The Chambers lived in North Dayton, in a home that was elevated about the level of the flood waters. When David saw the widespread damage the flood had caused to the city, he selflessly chose to leave the safety of his home, climbing into the family’s 16-person boat and rowing it out into the flood waters. David delivered supplies to victims all over the Riverdale area, and managed to save the lives of more than 150 Dayton residents. 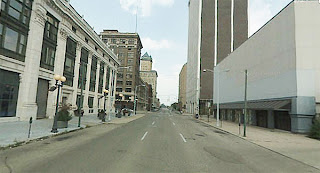 134 West Fourth Street Dayton, Ohio Today
Tragically, David’s heroism ended up costing him his own life. When a stray log struck the side of his boat, David was tossed overboard, where he ultimately died in the flood waters. The death of her husband left David’s wife, Stella, on her own to raise three daughters, all of whom were under the age of seven. During a period of financial instability, Stella was forced to place the girls in an orphanage. In the end, however, the girls were reunited with their mother. David was buried in the flood section of Dayton’s Woodland Cemetery. 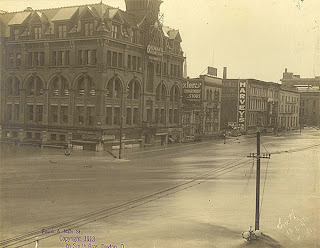 View of the flooding at the corner of Fourth and Main Dayton, Ohio 1913

By the end of the flood, March 26th, the damage was widespread. 14 square miles of the Dayton were underwater, and more than 360 people were dead. Some 20,000 homes were completely destroyed, an estimated 65,000 people were left homeless, and all told, the city had suffered close to $100 million ($2 billion in today’s dollars) worth of damage. The cleanup effort took more than a year to complete and Dayton’s economy didn’t make it back to pre-flood levels until more than a decade after the disaster. 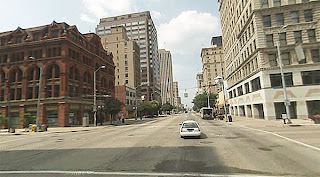 Thanks so much to Nan Card for letting us share a piece of this historical project on Ohio’s Yesterdays. We’re humbled by the interest in this project, and we really hope you enjoyed this snippet of history!
We’d also like to thank some of the great archives and archivists who have done so much to work to help preserve the amazing history of the 1913 flood, including the Dayton Metro Library and historian Trudy Bell. The amount of history compiled at these two websites is truly amazing. Lastly, thanks to Jason from .Insurance Town.com who lent us some of the resources we used to help prepare content for the web and publish our blog, and inspired our Mapping History Contest. Don’t forget to check out HistoricNaturalDisasters.com for more images, and for information on our Mapping History Contest – help us figure out the locations pictured in historic photos from 1913 and you could win $100!