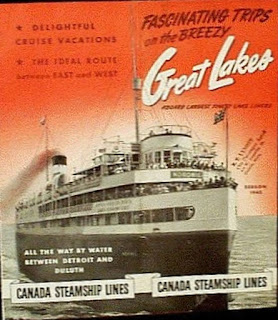 Cruising America's rivers and coasts has once again become popular. However, it was the Great Lakes destinations that remained the premier attraction for travelers both Canadian and American at the turn of the century. To meet this demand the Canada Steamship Lines set about building stately passenger ships. The “Noronic,” launched in 1914, joined her sister ships the “Huronic” and the “Hamonic.” All told the Canada Steamship Lines grew to include more than 100 of these luxurious vessels. The big steamers became known as the “Great White Fleet.” “Noronic's” beauty caused many to refer to her as the “Queen of the Lakes.” 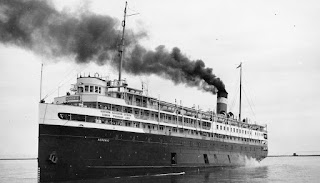 Noronic
Charles E. Frohman Collection
Built for both safety (steel-hulled and double-bottomed) and passenger comfort, the “Noronic” featured an orchestra, spacious staterooms and elaborate woodwork. She had five decks and room for as many as 600 passengers and 200 crew.
On the fateful night of September 16, 1949, the “Noronic” docked at Pier 9 in Toronto. In the early morning hours, a passenger smelled smoke coming from a locked linen closet. A bellboy retrieved the keys to the closet. When he opened the door, the fire exploded into the hallway fueled by fresh air and fed by the heavily oiled woodwork. Fire extinguishers proved useless and the ship's fire hoses were out of order. When the vessel's alarm whistle sounded 8 minutes later, more than half the decks were on fire. 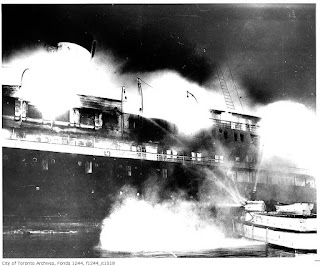 When pumpers arrived, flames were as high as the ship's mast. With stairwells on fire, passengers (some engulfed in flames) jumped into the frigid waters below. Others climbed down ropes as the “Noronic's” gangplank extended only to a single deck. Crew members broke stateroom windows, but many had already suffocated or were burned alive in their cabins. Fire boats, ambulances, and more pumpers arrived. When the first extension ladder reached B deck, it quickly broke under the weight of dozens of panicked passengers. Some fell into the water, others tumbled to their deaths on the pier. As the heat intensified, the decks buckled. So much water had been poured into the “Noronic,” that the vessel began to list. Firefighters were forced to stop until she again righted herself. When recovery operations began, firefighters found passengers trampled in their attempt to reach the decks via the burning stairwells. Many were found burned beyond recognition.  Of the 582 passengers 119 perished, all American save one.
No cause of the fire was ever determined, but the crew was blamed for cowardice and negligence. Too few (only 18) remained on board the “Noronic” that night. No one provided passengers with evacuation procedures or awakened them as the flames spread. Some of the crew even fled the ship. Using dental records for the first time, it took investigators nearly a year to identify the dead. “Noronic's” hull was eventually re-floated and scrapped at Hamilton, Ontario. The tragedy sounded the death knell for Canada Steamship Lines' cruises. Only a few years later, CSL, amid lawsuits and new regulations,  brought a sad end to  its once famous Great Lakes cruise line.
Posted by Nan Card at 8:03 AM