My search for photos of African American Civil War soldiers led to a conversation with Charles Weiker of Fremont, Ohio. He not only provided a photo, but also shared these photos and this fascinating story of another of his remarkable ancestors who came to Ohio, eventually settling in Sandusky County at the time of the Civil War…. 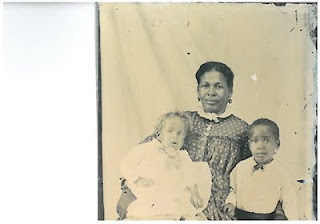 Martha Laughinghouse Weiker was born in 1848 in New Bern, Craven County, North Carolina; the 2nd daughter of Ajax and Elizabeth “Patsy” Godette Laughinghouse. The family of freeborn mulattoes traces its history to Ajax’s great-grandfather, Andrew Laughinghouse, who actually wasn’t a Laughinghouse at all.

Around 1769, a shipwreck occurred along the treacherous shoals of the North Carolina coast. The only survivors of the vessel were a small boy and his small body servant. That child was Andrew, who along with his slave, was taken in by the family of Thomas and Patience Smith Laughinghouse of Beaufort County, North Carolina. When questioning the boy (who must have been well off because he traveled with a servant) neither he nor his servant, due to their young ages, could tell the Laughinghouse family what Andrew’s last name was. Andrew was raised as one of the family and adopted the Laughinghouse surname as his own.

Martha’s oldest family lineage is through her mother’s side, stretching to the saga of Margaret Cornish, who at the age of nine, was kidnapped from her homeland of African Angola in the Mbundu nation within the kingdom of Ndongo and was put aboard a Spanish slave ship. The ship was captured by an English pirate ship that took its selected human cargo to Jamestown in 1619.

Margaret Cornish, along with her generations of descendants, lived their lives through a myriad of changing laws in the English colonies that slowly and blatantly circumvented their rights because of their mixed bloodlines. But they persevered despite difficulties.

In time, laws and events would converge and create a situation for free people of color. Just before the start of the Civil War, unsettled and unsatisfactory conditions relative to slavery as practiced in the South, led to the organization of a group of 60 people who migrated to Ohio. Members settled in Oberlin, Pittsfield, and Kipton in Lorain County, Ohio; Fremont, in Sandusky County, Ohio; and Elmore in Ottawa County, Ohio. Patsy and her daughters eventually settled Fremont around 1863. 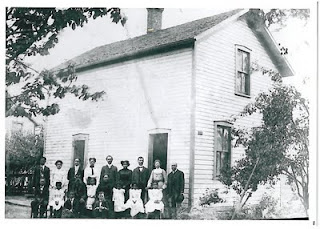 Martha was a devoted member of the A.M.E. Church on Second Street for more than 50 years. She took an active part in church work, becoming an honorary member of the Missionary Society. After living a full life with family and friends, and perhaps, sometimes pondering over the miles and years before and after the migration that brought her family North, she passed away in 1932 at the age of 84.

A version of this article appeared earlier in Lifstyles 2000.