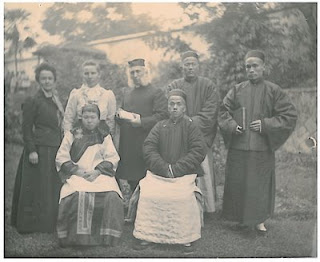 Born in Sandusky County, Ohio, in 1845, Reverend Franklin Ohlinger (standing third from left with other faculty of the provincial university) was the son of David and Hannah (Miller) Ohlinger. Next to the youngest of seven children, Franklin managed the family farm and supported his mother while his father and older brothers served in the Civil War. Shortly after the war ended, Ohlinger entered German-Wallace College (now Baldwin-Wallace College) located at Berea, Ohio. In 1868, he was ordained in the ministry of the Methodist Church. Early in 1870, Ohlinger attended a lecture about the mission fields. That fall, the Methodist Mission Board sent Ohlinger to serve in Foochow, China. 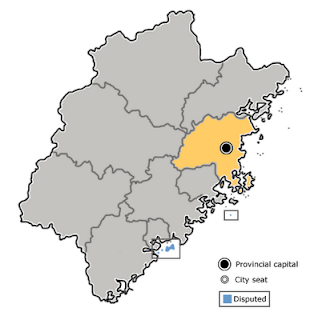 The opium wars, arrogance of foreign representatives, and the plundering of Peking in 1860, made Ohlinger's mission extraordinarily difficult. A skilled linguist, Reverend Ohlinger quickly learned the Chineses language and founded the "Zion's Herald." As president of the theological school, Ohlinger translated English hymns into the Chinese language for his students.

In 1876, Ohlinger returned to the U.S. and married Bertha Schweinfurth. The couple left that fall for Foochow. Ohlinger believed that education and evangelism went hand in hand. Assisted with funds from the wealthy Tiong Ah Hok, he founded the Anglo-Chinese College in 1881. For the next 6 years the Ohlingers taught, translated, published texts in the Chinese language. 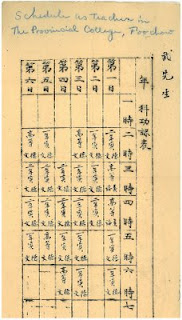 In 1887, the Ohlingers joined the newly opened mission fields of Korea. It wasn't long before the Ohlingers had mastered the Korean language and established the the first printing facility in Korea.

Following the deaths of two of their children in 1893, the Ohlingers returned to the U. S. for a furlough. Two years later, Reverend Ohlinger returned to China as an independent missionary. Ohlinger translated and published literary works, articles, and texts. In 1909, the Chinese government hired Ohlinger to teach languages at the provincial university at Foochow. (The image at left is one of Ohlinger's class schedules).

Reverend Ohlinger returned to the United States because of illness. Although frail, he lectured extensively on the Chinese culture and the Methodist Church's missionary work. Equally at home in the German, Chinese, Korean, and English languages, Ohlinger published and translated hundreds of articles, books, and pamphlets. Reverend Ohlinger passed away in 1919 at the Scarlet Oaks Sanitarium in Cincinnati, Ohio. 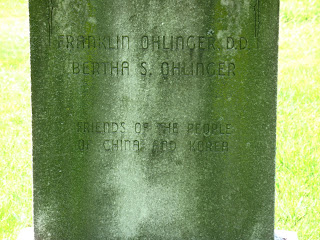 The Ohlingers are buried in the Woodlawn Cemetery in Toledo, Ohio. Their tombstone reads: "Friends of the People of China and Korea."

September 2011
Jon Shafer, whose great grandmother was the sister of Bertha Schweinfurth Ohlinger shared an incomplete news clipping about the Ohlingers. A relative shared it with him while attending a family reunion. The story is believed to have been published in a 1910 issue of the Toledo News Bee.

RACE 11,000 MILES WITH DEATH TO SIDE OF STRICKEN PASTOR

Spurred by the hope of reaching her goal in time to again see her husband in life, Mrs. Franklin [Bertha]Ohlinger, of the Vistala apartments, on Twelfth Street [Toledo], is preparing to undertake an 11,000 miles race with death to Foochow, China. Mrs. Ohlinger will be accompanied by her daughter,Constance, aged 10.

Cablegram bearing news of the serious illness of the Rev. Franklin Ohlinger at his Methodist missionary station in Foochow, has been received by his son, Attorney Gustave Ohlinger. No details were given.

Suspense of the Rev. Mr. Ohlinger's relatives here is made greater because of the distance that separates the stricken missionary from his home. The minimum schedule between San Francisco and Foochow is five weeks.


Mrs. Ohlinger is planning to start by next Friday. She will travel across the continent to San Francisco and expects to embark on the steamship "Nippon Maru" which sails on February 8. The route will ___ by the way of Honolulu, thence to Yokohama, and to [Shan?]ghai across the Pacific Ocean _________

[Mrs. Ohlinger was?]..... a missionary with her husband both at Korea and at Foochow. Her husband is one of the best known missionaries in the country. For over 40 years he has been teaching Chinese and Koreans.

The Rev Mr. Ohlinger and his wife started the first newspaper in Korea. Up to the time he was taken ill, Mr. Ohlinger was editing that publication. He has often been referred to as "Korea's Caxton." The Reverend and Mrs. Ohlinger were the pioneer missionaries of Korea. Two of the children, who died in 1893, were the first white children buried in Korea. Mrs. Ohlinger made her last visit to Foochow in 1899.


While he always called Toldedo his home, the Rev. Mr. Ohlinger has lived here only at intervals, spending a major portion of the last 40 years of his life as a missionary in foreign lands. He is 65 years old.

Thank you for this interesting biography of Franklin Ohlinger. I have been doing some amateur research on the Foochow Missionaries. This article has added so much to my collection.

I am pleased that you have found the Reverend Franklin Ohlinger and his missionary work at Foochow of interest. The Ohlingers were a highly gifted, intelligent couple, who were deeply devoted to their work in China and Korea. Nan

Hello. My great grandmother was a sister of Bertha Schweinfurth Ohlinger as well. Charles Warner (bear7784@gmail.com)