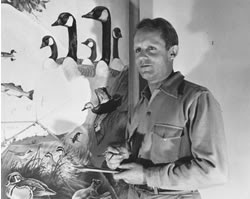 Bob Hines
(Courtesy of U. S. Fish and Wildlife Service)

For Bob Hines, the Sandusky River Valley’s wildlife proved an endless source of fascination. Camping, fishing, and hiking consumed his boyhood days. Little did he know that these experiences would dictate the course of his life.

Born in Columbus in 1912, Hines moved with his family to Fremont, Ohio, at the age of nine. He quickly transformed the Hines property into his personal “backyard zoo.” At any given time he could be found tending a menagerie of wild creatures – turtles, toads, fish, woodchucks, skunks, ducks, quail, and crow.

After graduating from Ross High School in 1928, Hines worked as a cook, inspector, and shipping clerk. Later, through a correspondence course, he learned taxidermy. Forced to rest during an illness, he took up drawing and painting the wildlife he so cherished.

In 1939, Hines was offered the position of staff artist of the Ohio Division of Conservation. When he discovered that his work would involve painting with oils, a medium he had never used, Hines contacted his high school art teacher Mary Williams. She provided a four-day crash course in oil painting. It was the last formal training Hines would ever have.

For nearly a decade, Hines illustrated the agency’s “Ohio Conservation Bulletin” and “Under Ohio Skies,” a wildlife education feature that appeared in 250 newspapers. Hines’ work caught the eye of Frank Dufresne, Chief of Information at the U. S. Fish and Wildlife Service. Before long, Hines was in Washington working as an artist-illustrator for the Fish and Wildlife Service. 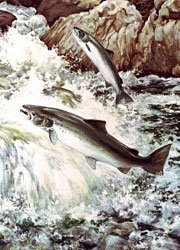 Atlantic Salmon
(Courtesy of U.S. Fish and Wildlife Service)
In 1991, Hines completed his final commission – the 50th anniversary edition of Rachel Carson’s Under the Sea-Wind. Carson, marine biologist and founder of the modern environmental movement, came to know Hines during their years at the wildlife service. In 1955, she commissioned her friend and colleague to illustrate her second book The Edge of the Sea.

When Bob Hines died in 1994, an admirer of his work wrote that “he had left behind a visual legacy of the wonder and beauty of the natural world.” His exceptional talent and knowledge of pose, plumage, and habitat merged to create living, breathing works of art.

Hines’ work was the subject of a special exhibit at the prestigious Ward Museum of Wildfowl Art in Salisbury, Maryland, in 2003. 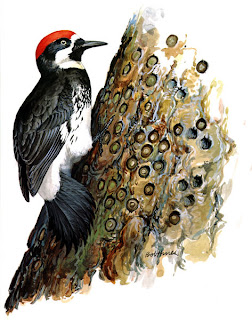